The 5G market in aviation report provides an analysis of the market from 2021 to 2026. It discusses industry and technology trends prevailing in the market, along with the drivers, restraints, challenges, and opportunities. The market is projected to grow from USD 0.5 billion in 2021 to USD 3.9 billion by 2026, at a CAGR of 52.7% during the forecast period. The market in Asia Pacific is expected to witness substantial growth during the forecast period, especially in countries such as China, India, and Japan, due to the growing air passenger traffic and requirement of fast internet connection at airports. Additionally, the increasing number of long-haul flights in these countries is resulting in a rise in demand for fast and consistent in-flight connectivity for by passengers.

5G infrastructure for aircraft as an end-use is expected to grow at the highest CAGR during the forecast period, owing to the rise in the development of smart connected aircraft across the globe. 5G infrastructure and services would be used in various flight operations as well as drone operations, such as real-time data acquisition & monitoring and in-flight entertainment.

Based on communication infrastructure, small cell is anticipated to grow at the highest CAGR during the forecast period. Small cell is more environmentally friendly, and it is expected to provide a clearer 5G signal with less power. Thus, aircraft would focus on the deployment of small cells owing to the better coverage and quality of 5G network provided by them on an aircraft.

Based on technology, ultra-reliable low latency communication/massive machine-type communications (URLLC/MMTC) is expected to grow at the highest CAGR during the forecast period. mMTC has been already developed as part of 3GPP Release 13/14 Low Power Wide Area (LPWA) technologies, which cover NB-IoT which would help in developing a latent-free, end-to-end 5G connection. The rise in demand for a reliable and consistent end-to-end internet connection in aircraft is expected to drive the growth for URLLC/MMTC. 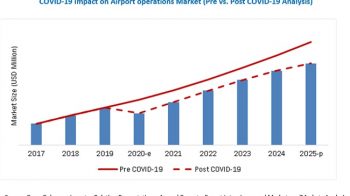