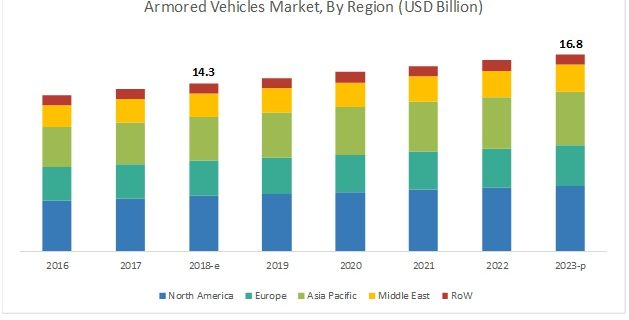 “By platform, the combat vehicles segment expected to lead the armored vehicles market, during the forecast period”

Major contracts for ammunition in 2019:

“By size, the wheeled segment to grow the highest CAGR during the forecast period”

Based on mobility, the market has been segmented into wheeled and tracked. The wheeled armored vehicles segment is projected to grow at the highest growth rate during the forecast period. There has been high demand of 4X4 light armored vehicles by military for ISR, transportation, and other warfare roles; thus, leading to its higher demand.

The competitive landscape chapter provides an overview of the prevailing competitive scenario and benchmarking of growth strategies adopted by of key players. This chapter offers a comprehensive micro quadrant analysis of more than 25 players in seat manufacturing industry and start-up matrix for start-up companies in this industry. It provides the positioning of players as visionary leaders, innovators, emerging companies, and dynamic differentiators.

Don’t miss out on business opportunities in Armored Vehicles Market. Speak to our analyst and gain crucial industry insights that will help your business grow.