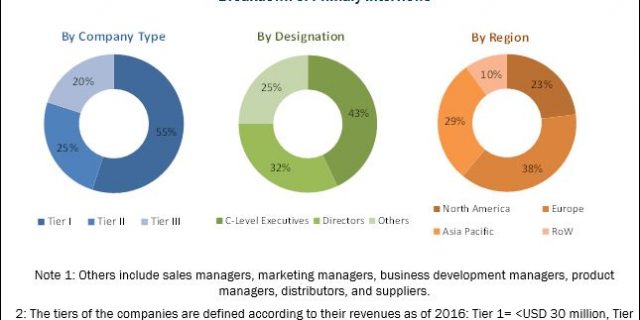 In 2018, the knee injuries segment is expected to account for the largest share of the global artificial ligaments market. This can be attributed to the increasing incidence of knee injuries, discomfort at the harvest site due to conventional surgical treatment methods that use autografts and allografts, rising participation in sports, and advantages of artificial tendons and ligaments as compared to autografts and allografts.

LARS held the leading position of the global artificial ligaments market in 2017. The company offers the Ligament Augmentation Reinforcement System (LARS) for a wide range of applications, such as soft-tissue repair and reconstruction for the treatment of knee, shoulder and arm, foot and ankle, and hip injuries. Since 1992, more than 60,000 LARS ligaments have been implanted by 400 surgeons worldwide, with more than 30,000 used for ACL alone. LARS ligaments have been successfully used for more than 25 years in a wide variety of patients ranging from the general public to elite athletes. LARS ligament procedures have led to high patient satisfaction, shortened recovery time, early return to normal activity (within 3–6 months), immediate restoration of stability and function, and minimal complications.

Neoligaments was the second-largest player in the artificial ligaments market in 2017. Innovation is the major strength of the company, on the basis of which it has been able to expand its product portfolio, enter new markets, and build a better network for increasing its customer base. The company’s innovative capabilities are evident from the products it has launched over the last few years. For instance, in 2016, the company launched Infinity-Lock, which is an implantable device used for the fixation of acromioclavicular separations resulting from disruption to the coracoclavicular ligaments. Moreover, Neoligaments, as a part of its marketing and sales strategy, focuses on hosting and attending webinars, workshops, exhibitions, trade shows, and conferences in order to showcase its products and increase the awareness related to the advantages offered by its products.

In 2018, Europe is projected to account for the largest share of the artificial ligaments market, followed by Asia Pacific. The market for artificial tendons and ligaments in this region is driven by the increasing number of government initiatives to encourage sports; increasing number conferences, meetings, symposia, and workshops to showcase the latest sports technologies in the UK; increasing cases of sports-related injuries; rising cases of knee replacements; minimal out-of-pocket expenditure for medical devices; increasing number of agreements between organizations, universities, and companies in Germany; increasing aging population; and growing initiatives to increase awareness about artificial tendons and ligaments in France.