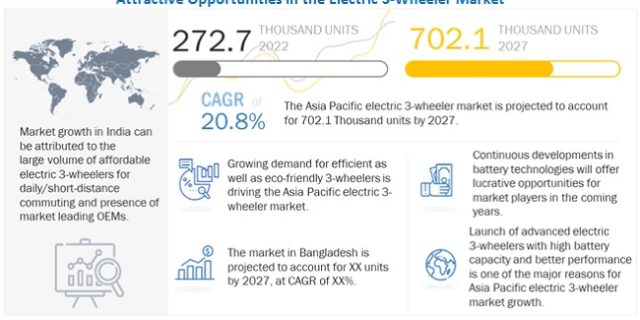 Government policies have encouraged private logistics companies to adopt electric 3-wheelers. The motivation for adoption is mostly to reduce carbon footprint. The shift to electric 3-wheelers is also in line with the government of India’s commitment to reducing carbon footprint, which encourages fuel-based 3-wheelers to be replaced with electrically powered vehicles. In February 2022, electric vehicle manufacturer Omega Seiki announced a partnership with logistics provider Zyngo to offer electric cargo 3-wheelers Rage+ for the last mile delivery. According to industry experts, the addition of electric vehicles will help cut down last-mile delivery costs by up to 50% and carbon footprint by more than 40%. The drivers of growth for logistics, supply chain, and warehousing include the demand from third-party logistics operators and e-commerce companies. This is fueling the demand for electric 3-wheelers in intracity transportation. The government policies of India are striving to create an ecosystem to accelerate the uptake of electric mobility in the country. The government has realized the importance of working jointly to achieve the broader national agenda to reduce vehicular pollution and oil import bill. This will provide a boost to the demand for electric 3-wheelers.