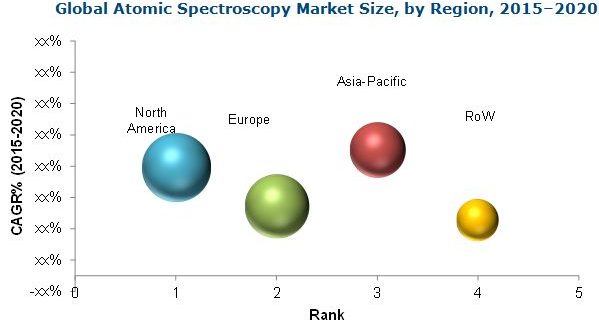 The growth of the overall market can be contributed to rising investments, funds, and grants by government bodies worldwide and technological advancements. In addition, growing food safety concerns and stringent regulations have contributed to market growth. In the coming years, the atomic spectroscopy market is expected to witness the highest growth rate in the Asia-Pacific region, with emphasis on India, China, and Japan.

What the Market Looks Like?
Predicted to grow at a CAGR of 6.0% during the forecast period, the global Atomic Spectroscopy market is estimated to reach USD 5.60 Billion by the end of 2020.

Geographical growth scenario of Atomic Spectroscopy Market
In 2015, North America is expected to account for the largest share of the atomic spectroscopy market, followed by Europe and Asia-Pacific. However, the Asia-Pacific market is slated to grow at the highest CAGR during the forecast period and serve as a revenue pocket for companies offering atomic spectroscopy equipment.