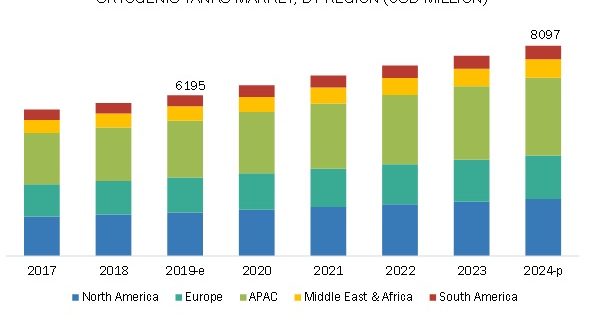 Increasing demand for LNG in energy generation is expected to drive the market during the forecast period.

The global cryogenic tanks market size of is estimated to be USD 6.2 billion in 2019 and projected to reach USD 8.1 billion by 2024, at a CAGR of 5.5%. Cryogenic tanks are designed to keep the gases in the liquid state at very low temperatures (below − 238°F), which cannot be managed using normal tanks. Cryogenic tanks are used for storage and transportation of liquid gases, such as oxygen, nitrogen, liquefied natural gas (LNG), hydrogen, helium, and argon. They are available in various configurations, such as horizontal, vertical, double walled, and insulated and find a wide range of applications in metal processing, energy generation, electronics, medical technology, food & beverage industry, water treatment, and other industries.

Rising demand for LNG in various sectors, such as automotive, domestic & commercial fuel, and power generation is expected to boost natural gas exploration and production, thereby boosting the growth of the cryogenic tanks market. On the other hand, the increase in infrastructure spending, space applications for cryogenic technologies, and cryogenic energy storage systems represent promising growth opportunities for the market.

The rise in the GDP of emerging economies, such as China, India, and Brazil is expected to contribute to the growth of energy and power industries. Moreover, the improvement in infrastructural activities, owing to the acceleration of urbanization has resulted in significant demand for steel and other metals. Currently, several big players in the cryogenic tanks market are focusing on inorganic growth strategies. They are shifting their focus to developing economies (such as India and China) to gain more market shares.

The storage application of cryogenic tank is expected to dominate the market, in terms of value, during the forecast period. Cryogenic tanks are widely used for bulk storage of liquid nitrogen, LNG, oxygen, and other gases to be used in a wide range of industries, such as metal processing, energy generation, medical technology, and food & beverage. Tanks used for storage are larger in size, ranging from 525 to 264,000 gallons (2,000 to 1,000,000 liters) and are available in both horizontal and vertical configurations. There is a huge demand for cryogenic storage tanks from metal processing, energy generation, and electronics industries, which is expected to boost the growth of the market.

Metal processing was the largest end-use industry of the cryogenic tanks market, in 2018. Cryogenic tanks are increasingly being used in the metal-processing industries, especially the steel industry. Huge quantities of nitrogen and other industrial gases are used during the manufacturing process in the metal processing industry. Nitrogen is also known to be largest consumed gas in the industry. It is used as a high pressure gas for laser cutting of steel and metal.

APAC is expected to be the fastest-growing market, in terms of both production and demand. APAC and North America dominated the cryogenic tanks market in 2018. APAC is witnessing significant developments in energy, power, and technology sectors, which further drives the market for cryogenic tanks in the region. The growth in the APAC steel & metal manufacturing sector has been driven majorly by domestic availability of raw materials including iron ore and cost-effective labor. 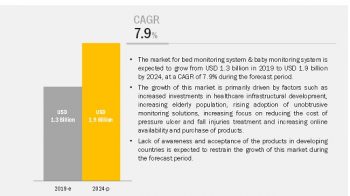