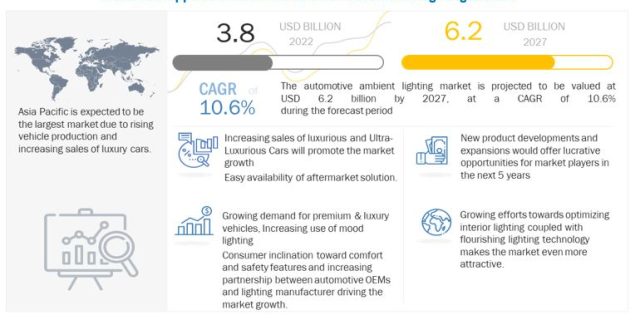 The Automotive Ambient Lighting Market size is projected to reach USD 6.2 billion by 2027 from an estimated USD 3.8 billion in 2022, at a CAGR of 10.6% from 2022 to 2027. The market is expected to witness growth due to increasing vehicle production, customer inclination towards comfort and safety features. Similarly, the growing demand for comfort and safety features in premium segment vehicles in growing economies such as China and India is expected to drive the market for ambient lighting in the near future.

The Automotive Ambient Lighting Market is offered for several applications such as dashboard, center console, doors, footwell etc, by the OEMs in the medium to high end cars. To attract the customers and differentiate among competition, OEMs have started offering ambient lighting in one or more number of applications in mid to top end variants of their models. Plus, the ambient lighting system is also offered as an accessory by OEMs to install in lower variants which provide similar performance as the OE fitted system. Thus, growth of automotive ambient lighting is expected to be noticed in developing nations of Asia Pacific countries in lower to mid-segment vehicles

Developing solutions for next-generation vehicles such as electric vehicles, autonomous vehicles, and self-driving cars are expected to emerge as the most promising opportunity for automotive ambient lighting manufacturers. Long-term partnerships with OEMs and technology companies for further enhancement of lighting technology are another major opportunity for market players. Hence, growing electric and autonomous vehicles sales with advance safety feature will drive the Automotive Ambient Lighting Market.

The F-segment passenger car is projected to register a highest CAGR for Automotive Ambient Lighting Market. Improved economic condition and rising purchase power, the growing preference of customers for premium vehicles is increasing the demand. Many major players in global market like Hella (Germany), ams Osram (Austria), and Valeo S.A. (France), are focusing on developing the products for luxury vehicle with advance technology due to the growing demand.

Asia Pacific is expected to be the largest aftermarket for automotive ambient lighting in terms of volume as well as value. Major contributing countries are China, Japan, South Korea, and India. The major reason for this growth is the huge vehicle parc of A and B segment cars in this region. In the last decade, the economy of Asian countries has improved owing to rising economic development of China and India. Asia Pacific is also considered as a production hub for the automotive industry, particularly for low-mid segment cars. With rising disposable income availability of easy aftermarket options and rising young population, sales of second har cars have increased with fitment of ambient lighting has been a trend in these cars. All of the factors are expected to continue in coming years which would allow the Asia Pacific region to dominate the automotive ambient lighting aftermarket in future as well