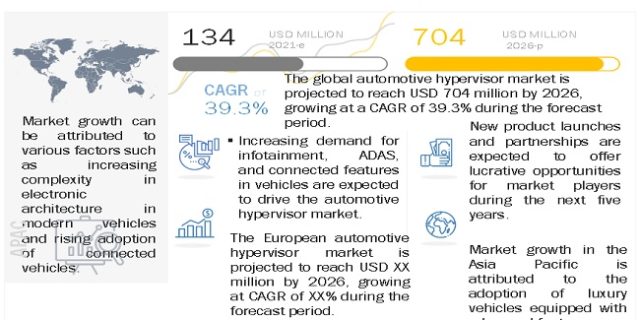 The automotive hypervisor market is projected to grow at a CAGR of 27.0% from 2022 to 2027, to reach USD 566 million by 2027 from USD 171 million in 2022. The basic objective of the hypervisor is to create an abstraction of various automotive functions by enabling the installation of multiple operating systems for several applications.

Economy class passenger cars are equipped with a low number of advanced features to enable cost-effectiveness. This factor restricts automakers from installing advanced functions in economy passenger cars to limit the overall prices of these vehicles and increase the sales of these variants. Therefore, advanced functions such as ADAS & safety, body & comfort, cockpit telematics, and navigation are not installed in economy class vehicles. The Asia Pacific region has the highest demand for economy vehicles which is leading to the growth of the market. Governments across Europe have mandated safety features to be installed in passenger vehicles which is the key factors driving demand for automotive hypervisors in Europe.

Semi-autonomous vehicles are equipped with any three of technologies, namely, intelligent park assist, emergency brake assist, blind spot detection, lane keep assist, adaptive front lights, adaptive cruise control, RADAR, and LIDAR. The share of semi-autonomous vehicles is expected to rise in the coming years due to an increase in the electrification of vehicle components and the use of smart automotive components which offer greater comfort and safety to drivers. In 2020, Stradvision announced to utilize the QNX Software Development Platform within a number of next generation Advanced Driver Assistance Systems (ADAS) and Autonomous Vehicles (AV) from South Korean automakers. Government safety regulations also play a major role in the adoption of these technologies. Additionally, technologically driven companies and OEMs are collaborating to provide various safety and convenience applications to lead in the competition, which has resulted in the increased demand for these vehicles.

Asia Pacific comprises emerging economies such as China and India, along with developed nations such as Japan, and is the largest market for automobiles. In recent years, the region has emerged as a hub for automobile production. Infrastructural developments and industrialization in emerging economies have opened new avenues, offering various opportunities for automotive OEMs. In addition, increasing purchasing power has led to the demand for premium automobiles. Global OEMs such as Volkswagen and General Motors cater to this market through joint ventures with domestic manufacturers. In the Asia Pacific region, China is considered a market leader. China has witnessed significant growth in the sales and demand for premium vehicles in recent years. China has a high demand for the manufacture and export of luxury vehicles, which is leading to increasing disposable incomes in the country. A surge in demand is expected as current vehicle penetration is lower compared to that in the developed countries. China is one of the leading manufacturers of automotive components including ECUs in the world. This has given rise to the demand for hypervisors in the automotive industry.