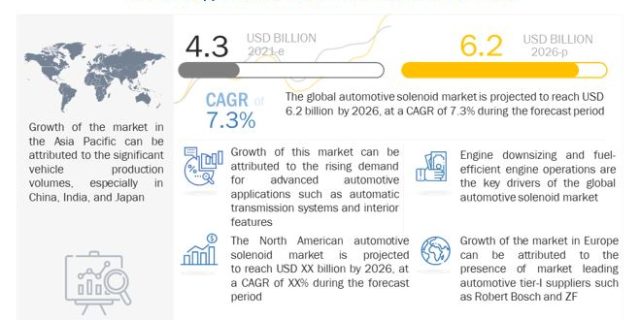 The global automotive solenoid market is estimated to be USD 4.3 billion in 2021 and is projected to grow at a CAGR of 7.3%, to reach USD 6.2 billion by 2026. The growth of this market is fueled by rising automation in vehicles and increased vehicle manufacturing in the emerging economies due to urbanization. The fact that solenoids are used in various automotive systems and features in every vehicle is expected to drive the market during the forecast.

Engine Control and Cooling System to hold the second-largest share in the automotive solenoid market, by application type

Passenger Cars: A promising market due to the significant global production volumes

Asia Pacific is expected to have the largest market share in terms of value and volume as the region is home to leading automotive component suppliers such as Denso, Nidec Corporation, and Mitsubishi, among others. Moreover, countries such as China, Japan, South Korea, and India are considered as major automotive manufacturing hubs, which is further expected to boost the Asia Pacific automotive solenoid market. China is estimated to dominate the Asia Pacific automotive solenoid market with the largest market share during the forecast period. China is the world’s largest vehicle manufacturer, which is expected to be a driving factor for the growth of the automotive solenoids market in the country. Moreover, China has the potential to produce automotive components in large volumes at a lower cost, which provides it a competitive edge over other countries.