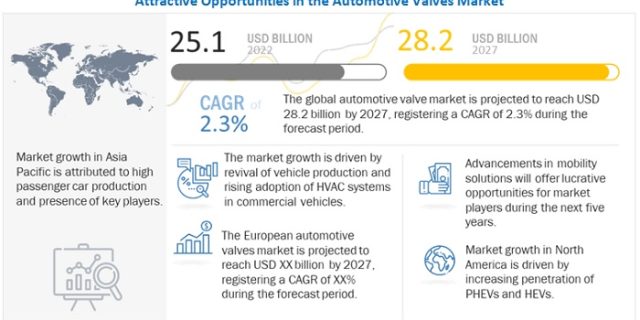 Solenoid valve – Expected to grow at the highest CAGR

Automotive solenoid market is expected to grow with highest CAGR during the forecast period owing to its fast and wide field of uses. It is used in door locks, steering locks, starter motors, fuel valve control, and anti-lock braking system (ABS). Automotive solenoid is considered suitable for electronic uses. The market is expected to witness a gradual shift from conventional mechanical actuators to electromagnetic actuators such as wastegate and VGT. Further, with electrification and use of higher end body control features in vehicles, solenoid valves is expected to find more uses in vehicle operation. These factors are expected to boost the demand for automotive valves in the market during the forecast period.

In HEVs, automotive valves of both ICE vehicles and BEVs are used. These include HVAC valves, solenoid valves, brake combination valves, and tire valves. Modern HEVs are enabled with efficient improved technology such as regenerative brakes, electric motor drive, and automatic start/shutoff. Regenerative brakes convert the vehicle’s kinetic energy into electric energy to recharge its electric battery. Similar to PHEVs, most of the systems in HEVs need automotive valves to support their smooth functioning. The market for HEVs is the fastest growing in North America. However, Asia Pacific registered itself as the biggest market for HEVs. The rise of HEVs in the region is due to stringent emission standards imposed by various governments in the region. Additionally, several incentives are provided to emphasize hybrid vehicles. The total sales of HEVs in Asia Pacific in 2020 was 13.8 million units, and in 2021, it was approximately 15.3 million units. With the growth of the HEV market, the automotive valves market will grow during the forecast period.

The Asia Pacific region is expected to be the largest market for automotive valves market during the forecast period. Asia Pacific is home to some of the fastest-developing economies of the world, such as China and India owing to presence of various OEMs such as Tata Motors, Toyota and others. Additionally, they have adopted various initiatives to attract major OEMs for the manufacture of electric vehicle in domestic markets and are emphasizing on fast adoption of electric vehicles. China is anticipated to be the largest market for automotive valves in the Asia Pacific, whereas India is evaluated to be fastest-growing market during the forecast period. Rise in demand for passenger vehicles will be significant driver for growth of the market. The rise in demand of the light commercial vehicles and heavy trucks in India is also expected to be major factor in growth of automotive valves market in the next few years. The Japanese market is evaluated to be the second largest in Asia Pacific (APAC) succeeded by India and South Korea.

The report profiles all major players in the automotive valves market, including Continental AG (Germany), Robert Bosch (Germany) Denso Corporation (Japan), and BorgWarner (U.S) among others.