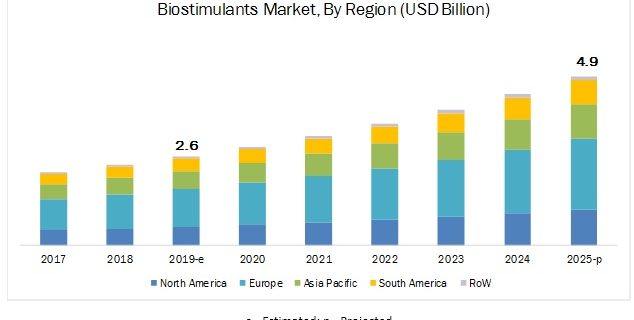 The Biostimulants Market is estimated to be valued at USD 2.6 billion in 2019 and is projected to reach USD 4.9 billion by 2025, growing at a CAGR of 11.24% during the forecast period. The rising demand for sustainable agriculture and strong market demand for high-value crops drive the biostimulants market. The benefits associated with biostimulant products are the major factors contributing to the growth of this market, globally.

With a growing population and declining arable land for crop production in many Asia Pacific countries, manufacturers, farmers, and governments are witnessing tremendous pressure to meet the growing demand for food. With limited availability of arable land, crop yield and crop nutrition availability have become an important concern among crop growers. Also, extreme environmental conditions and dynamic change in climatic conditions increase the chances of abiotic stresses such as salinity intolerance and drought stress and have a great impact on plant physiology. Biostimulant products help plants overcome abiotic stresses and maintain the crop nutrition sustenance throughout the plant growth cycle.

Furthermore, the unregulated environment of the biostimulants market also drives the entry of players across different tiers in the market. The raw materials for biostimulant formulation are also easily available at low costs or can be obtained through in-house operations. The machinery and operational costs are limited due to simpler production methods of biostimulant ingredients such as humic substances, seaweed extracts, amino acids, and microbial. The absence of large-scale producers of agrochemicals in the market and the low entry barriers had facilitated the entry of many small-scale manufacturers to launch new products and strengthen their positions in their domestic markets.

Humic substances have been the most common ingredient used to formulate biostimulants:

However, constant research by key players has boosted the application of seaweeds in these formulations. According to the FAO data, the total seaweed produced in 2005 was 14.7 million tonnes (16.2 million tons), while in 2015, the production doubled to 30.4 million tonnes (33.5 million tons). Asia Pacific was the major exporter of seaweed products in the world, according to the FAO, in 2017. The growing seaweed production in the Asia Pacific region can be utilized to meet the growing demand for biostimulants. The natural origin of seaweed-based biostimulants also reduces the burden of manufacturers to maintain regulatory norms and allows the consumers to choose from a variety of products at reasonable rates.

Biostimulants are gaining pace in the agricultural industry, being used as plant growth promoters:

Initially, biostimulants were only used for vegetable and fruit crops, along with other high-value crops such as ornamentals and plantation crops. Now, they also play an important role in traditional food crops such as corn, wheat, and rice, by being used as an added complement along with fertilizers to catalyze nutrient uptake process of the crops. Moreover, biostimulants are perfectly compatible with integrated crop management techniques that are a subset of sustainable agriculture. Innovations in process technologies for biostimulant formulation creates an opportunity for the manufacturers to come up with new products based on seaweed ingredients and plant extracts. For instance, Valagro (Italy), a biostimulant and specialty nutrient manufacturer, developed the GeoPower technology that acts as the platform for its biostimulant products. Development of such a technology and the entry of new players in the biostimulant industry create an opportunity for the market to grow in the next 6 years.

Asia Pacific is projected to witness the fastest growth in the biostimulants market from 2019 to 2025:

The growth of the biostimulants market in the region is driven by the increasing investment of key players in countries such as China, India, and Indonesia. There are multiple domestic biostimulant manufacturers in the Chinese market; these companies are introducing both generic and patented products in the market. The contribution of regional companies—such as Sea6 Energy (India), which has increased the production of innovative marine-based biostimulant technologies and products such as AgroGain—has encouraged other domestic players in the industry to be competitive and come up with innovative methods in their regions. Even global companies have been introducing their innovative products and technologies in the Asian market through organic strategies. For instance, Valagro (Italy) recently launched its biostimulant product YieldOn in the Indian market as an expansion strategy.

There are many domestic and global players that provide biostimulants for a wide range of crops across the world. Major manufacturers are based in Europe and Asian countries. In multiple regions, due to unclear regulation, an ambiguity exists between biostimulants and biofertilizers. Hence, the scope of this report includes a detailed study of those biostimulant manufacturers, whose portfolios mention the products as biostimulants. Key companies in the biostimulants market are BASF (Germany), Isagro (Italy), Valagro (Italy), Bayer (Germany), Italpollina (Italy), Koppert Biological Systems (Netherlands), Acadian Seaplants (Canada), UPL (India), and Biolchim (Italy). Various strategies such as acquisitions, joint ventures, and new product launches were adopted by the companies to enter the biostimulants market.

Agricultural Sprayers Market worth $3.5 billion by 2027