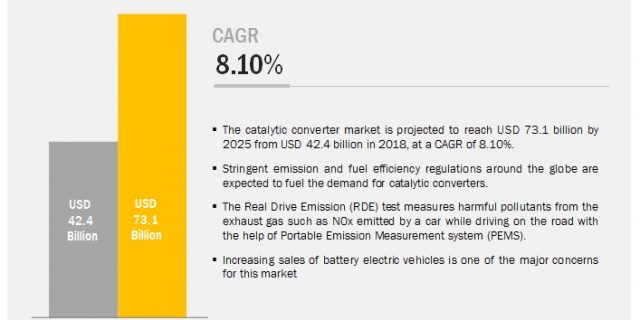 The Catalytic Converter Market is estimated to be USD 42.4 billion in 2018 and is projected to reach USD 73.1 billion by 2025, at a CAGR of 8.10%. The demand for catalytic converters is driven by the increasing adoption rate of SCRs in diesel engines, fuel efficiency regulations, and stringent emission norms around the globe.

Catalytic converter manufacturers need to focus on high performance catalysts that will offer harmless emission of exhaust gases. For instance, Tenneco presented its latest ride performance and clean air solutions that reduce emissions, contribute to improved fuel economy, and enhance vehicle performance at the 2017 North American Commercial Vehicle Show in Atlanta, Georgia. The company will present the newest member of the XNOx technology family, XNOx Liquid Urea SCR. In Europe, as of 2015, Euro VI emissions standards are followed. As per these standards, heavy-duty vehicles are required to reduce NOx exhaust emissions by 80% and particulate matter exhaust emissions by 50%. Similar upgrading is followed in the North American and Asia Oceania regions. This would create an opportunity for the catalytic converter and aftertreatment devices such as DOC and SCR suppliers for HCVs.

Palladium is one of the fastest growing segments in the catalytic converter market, by material type. Palladium is the best at capturing oxygen atoms. Palladium, along with platinum, traps oxygen molecules that combine with the unburnt fuel, to produce CO2 and heat. This heat energy enhances the catalyzing properties of palladium, causing it to catalyze CO into CO2. Thus, the toxic exhaust gases are converted into non-toxic gases. Another advantage of palladium is that at higher temperatures, it not only reacts well but also tolerates higher temperatures better than platinum. Therefore, the market for palladium has thrived. Further, given the cost advantage of using palladium over platinum, there is a demand for developing technologies that use palladium. The palladium market is expected to have a huge demand from countries of the Asia Oceania and South American regions in the coming years owing to their upcoming emission norms. Hence, palladium suppliers can focus on these regions to create an additional revenue stream.

The truck segment is estimated to grow at the highest rate in the vehicle type market owing to the rapidly increasing industrialization, growing logistics activities, and expanding ecommerce business. Most of the heavy trucks are usually equipped with DOCs, and the upcoming regulatory compliances along with rising truck production would boost the market for SCRs in heavy trucks in the coming years. Moreover, upcoming emission regulations in countries such as China and India will further boost the market for catalytic converters. Thus, the companies offering catalytic converters can start focusing on the truck segment by extending their product portfolio with efficient solutions to increase their revenue stream in the coming years.

Procurement as a Service Market expected to gain $7.8 billion by 2024