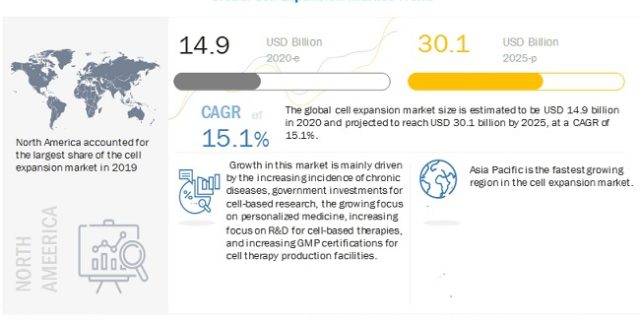 Cell expansion is used in the R&D of drugs for the treatment of diseases. It is used in the production of vaccines, drugs, therapeutics, and antibiotics. The rising incidence of diseases such as diabetes and cancer has created a need for extensive research to develop new treatment options. According to the International Diabetes Federation (IDF), approximately 425 million people had diabetes in 2017, and this number is estimated to reach 629 million by 2045. Cancer, which has become the leading cause of death globally, accounted for 9.6 million deaths in 2018. According to GLOBOCAN, the number of cancer cases will rise to approximately 30 million by 2040 from 18 million in 2018. The growth in the prevalence of these diseases has resulted in a need to conduct extensive research for their diagnosis and treatment; cell expansion forms an important part of this research.

Research in cell biology necessitates the use of animals and humans, as animal and human cells are used in gene therapy studies that involve the recombination of genes and stem cell research therapies. These cells are also used for in vivo toxicity and pharmacokinetic testing of drugs, which may harm animals and humans. In addition, stem cell research studies use human embryos for clinical applications that often lead to the destruction of human embryos. To monitor these activities, strict regulations have been formulated by ethical authorities in various countries across the globe. Authorities such as the Human Tissue Authority (HTA), Human Fertilization and Embryology Authority (HFEA), Medicines and Healthcare products Regulatory Agency (MHRA), and Central Ethics Committee for Stem Cell Research (ZES), among others, have implemented stringent regulations for cell biology research. These ethical concerns and restrictions on the use of cells for research are limiting cell biology research to a great extent in various countries across the globe. This, in turn, is expected to restrict the growth of the cell expansion market.

North America accounted for the largest share of the cell expansion market in 2019.

North America accounted for the largest share of the cell expansion market in 2019. The large share of this segment can primarily be attributed to the rising incidence of cancer, increasing government funding, rising research activates on stem cell therapies, growing awareness regarding advanced treatment methods, growing geriatric population, and the strong presence of industry players in the region.