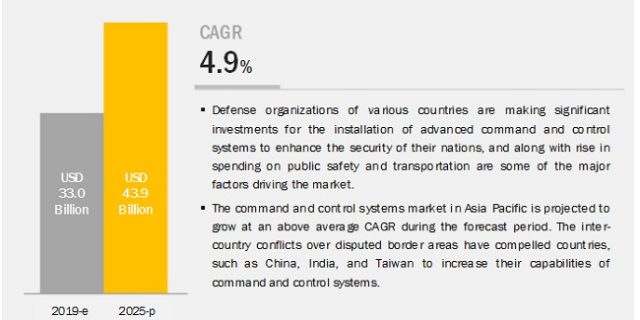 The report “Command and Control Systems Market by Application (Government & Defense, and Commercial), Solution (Hardware, Software, Services), Platform (Land, Airborne, Maritime, and Space), Installation Type, Installation Base, and Region–Global Forecast to 2025″, is projected to grow from USD 33.0 billion in 2019 to USD 43.9 billion by 2025, at a CAGR of 4.9% from 2019 to 2025. The growth of the market can be attributed to increased use of battle management systems for battalion-level and dismounted soldiers and increased use of artificial intelligence, machine learning, and IoT, among others.

Based on the installation type, the new installation segment is projected to lead the command and control systems market during the forecast period.

Based on the installation type, the market is projected to be led by the new installation segment from 2019 to 2025. This segment is expected to grow during the forecast period due to multiple factors such as the continual upgrades of various battle management applications to include Augmented Reality (AR) and Virtual Reality (VR) based battle planning software, simulation and training, adaption to electronic warfare and installation of electronic countermeasures, expansion of hardware to include more bandwidth among others.

The land segment is projected to lead the command and control systems market from 2019 to 2025.

Based on the platform, the land segment is estimated to account for the largest share of the market during the forecast period. Growth in this segment can be attributed to the increasing need for infrastructure, software and solutions to cater to command and control systems for the battalion level, platoon level, dismounted soldier level, and joint-force level. Increasing use of multi-purpose vehicles that offer mounted-dismounted reconnaissance, surveillance and target acquisition systems for agile and protected contact operations are also factors contributing to the demand in this segment.

Asia Pacific is projected to be a high growth potential market for command and control systems during the forecast period.

The command and control systems market in Asia Pacific is projected to grow at the highest CAGR during the forecast period. Various border disputes between countries such as China, India, Pakistan, Afghanistan, North Korea and South Korea, among others, are driving these countries to increase their investment in defense technology, which includes installation of and upgrades to command and control systems. For example, in November 2019, Leidos (US) secured a contract worth USD 95 million with US Air Force to perform the command, control, communications, computers, combat systems, intelligence, surveillance, reconnaissance and operations support services for the US Air Force bases within Japan and Korea.

In 2018, Boeing Co. received a contract worth USD 208 million from the Japanese Air Self Defence Force’s Airborne Warning and Control System (AWACS). Mission computing upgrades will give Japanese AWACS better interoperability with US systems and improve their standalone command and control capability.

Don’t miss out on business opportunities in Command and Control Systems Market. Speak to our analyst and gain crucial industry insights that will help your business grow.