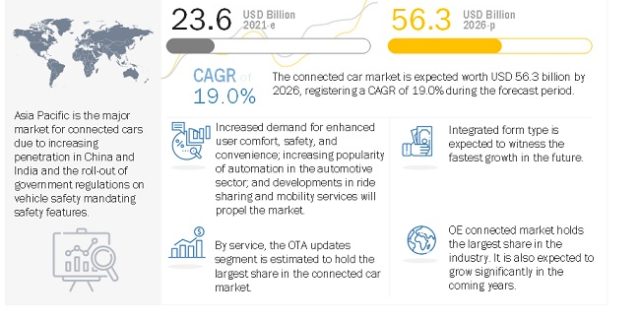 The connected car market is estimated to grow from USD 23.6 billion in 2021 to reach USD 56.3 billion by 2026, at a CAGR of 19.0%. Factors such as the rollout of stringent safety regulations, growing sales of high-end luxury cars, development of 5G infrastructure, autonomous vehicles, and growing adoption of integrated connectivity are expected to drive the demand for connected cars.

Cellular network has evolved over the years from 2G GPRS to 3G HSPA and 4G LTE, and now 5G. The launch of 5G will provide improved connected car technologies and functionality, not only in terms of services and features but also in terms of the accuracy of data and performance of vehicles. The implementation of a 5G-based telecommunication infrastructure can lead to a reduction in data transfer time and operating costs. The development of solutions by service providers in 5G technology is expected to further drive the adoption of the cellular network in the automotive industry. For instance, Qualcomm Technologies, Inc. announced the latest additions to its portfolio of Qualcomm Automotive Wireless Solutions for next-generation connected vehicles ─ the Qualcomm Snapdragon Automotive 4G Platform and the Qualcomm Snapdragon Automotive 5G Platform. Asia Pacific is the largest market and is also expected to be the fastest market for cellular networks due to the developed 4G networks and the development of 5G infrastructure in China, India, Japan, and South Korea. Europe and North America are also expected to witness growing 5G penetration in the passenger. For instance, Ford is building its own LTE/5G network to test connected cars in a private environment.

BEVs are expected to witness higher penetration of connected services compared to PHEVs and HEVs. BEVs, such as the Tesla Model X, offer autopilot features, which include ADAS features such as adaptive cruise control, auto park, and lane departure warning systems. Nissan also offers proPILOT features in its Nissan Leaf and Nissan Altima electric cars, among others. The features of proPILOT include ADAS features such as ACC, IPA, and LDW. For such features to perform effectively, sensors such as cameras and radar are required. Currently, developments are undergoing in LiDARs for mass commercialization, which will significantly reduce the LiDAR prices significantly, thereby boosting the adoption of connected services globally. In the annual Global Electric Vehicle Outlook by the International Energy Agency (IEA), sales of electric cars, including fully electric and plug-in hybrids, doubled in 2021 to a new record of 6.6 million. Despite strains along global supply chains, sales kept rising strongly into 2022, with 2 million electric cars sold worldwide in the first quarter, up by ~75% from the same period a year earlier. Asia Pacific is expected to be the largest market, with China being the largest. Increasing investments by EV automakers to fully electrify their vehicle models are expected to drive electrically connected car technology developments further. For instance, in 2021, Nissan announced its plan to invest USD 17.6 billion over the next five years to speed up the electrification of its product line. It aims to roll out 23 new electrified models by 2030, 15 of which will be fully electric. Thus, with the growing sales of premium and luxury EVs, such as Tesla, Nissan, and Ford, the adoption of connected car services is expected to grow significantly

One of the key drivers for the Asia Pacific market is the increased demand for infotainment and navigation services, particularly in China, Japan, India, and South Korea. China is one of the largest automobile markets in the world and the largest automobile market in the Asia Pacific. According to MarketsandMarkets estimates, China’s passenger car production is expected to reach 24 million units by 2027, presenting a huge opportunity for connected car manufacturers globally and domestically. China’s biggest technology companies are developing platforms for connected cars. For instance, in 2021, Blackberry and Baidu agreed to expand their partnership that aims to provide the automaker the tools to develop/launch next-generation connected and autonomous vehicles in China. India is expected to be a major automobile market in the Asia Pacific region. However, the penetration of connected cars is still at a nascent stage. With the growing demand for services such as infotainment and smartphone integration with vehicles, India is expected to be a lucrative market for connected cars in the years to come.

The global connected car market is dominated by major players such as Continental (Germany), Bosch (Germany), HARMAN (US), Airbiquity (US), and Visteon (US). These companies have strong distribution networks at a global level and offer an extensive product range. These companies adopt strategies such as new product developments, collaborations, and contracts & agreements to sustain their market position.