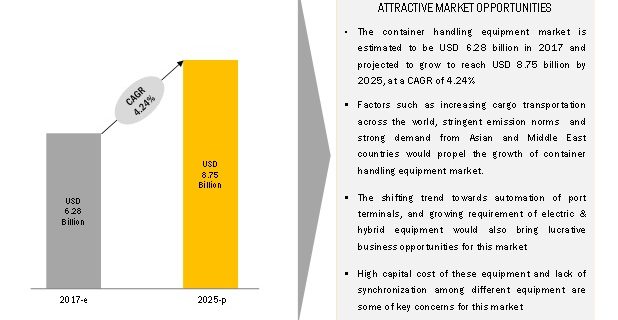 The market for Container Handling Equipment Market is projected to grow at a CAGR of 4.24%, during the forecast period, to reach a market size of USD 8.75 Billion by 2025 from an estimated USD 6.28 Billion in 2017. The increasing containerized trade across the world, stringent emission regulations for container handling equipment, and strong demand in Asia Pacific and the Middle East would fuel the demand for container handling equipment.

The ship-to-shore cranes segment is estimated to hold the largest share of the container handling equipment market during the forecast period.

The ship-to-shore cranes segment is projected to hold the largest market share from 2017 to 2025. These cranes are used for loading and unloading containers from ships. According to a UNCTAD report published in 2016, the average container ship size increased by 132% over the past 7 years. Container loading and unloading from larger ships are fully dependent on the availability of these cranes. As per the Port Equipment Manufacturers’ Association (PEMA), the demand for these crane types mainly comes from medium and larger ports in countries such as China, Japan, Singapore, Australia, India, and Vietnam in Asia Pacific due to increased container traffic. All these factors are expected to boost the demand for ship-to-shore cranes.

The electric propulsion segment is expected to be the fastest-growing market for container handling equipment from 2017 to 2025.

The electric propulsion market is expected to grow at the fastest rate during the forecast period due to the increasing stringency in emission regulations. The industrial equipment emission norms have constantly been upgraded across different regions. According to the EU norms, NOx and PM levels have reduced by nearly 95.7% and 97.2%, respectively, from Stage I to Stage V. Also, as per the US EPA norms, NOx, and PM levels have declined by 95.6% and 96.2%, respectively, from Tier 1 to Tier 4. Countries such as China, Japan, South Korea, and India are also following similar norms in line with these standards. Konecranes, Kalmar, and Hyster, among other companies, have not only extended their electric equipment offerings for RMG, RTG, and straddle carriers but also initiated R&D efforts for the same. Due to these stringent emission norms and the need for increased operational efficiency, the electric propulsion type market is expected to grow at the highest CAGR during the forecast period.

As per the World Bank, China is the global leader in container handling capacity and accounted for 28.5% of the total container cargo moved in 2016. The ports in Shanghai (China), Shenzhen (China), Hong Kong, Ningbo-Zhoushan (China), Singapore, and Keihin (Japan) handle millions of TEU annually, which is driving the growth of the market in Asia Pacific. According to MarketsandMarkets’ analyses, the container handling capacity in Asia stood at around 40–42% in terms of value in 2017. This trend is estimated to continue and, to handle the increasing container traffic, an increase in the demand for container handling equipment as well as automation at ports is expected in the region in coming years. 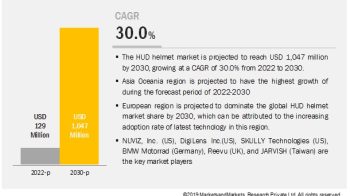