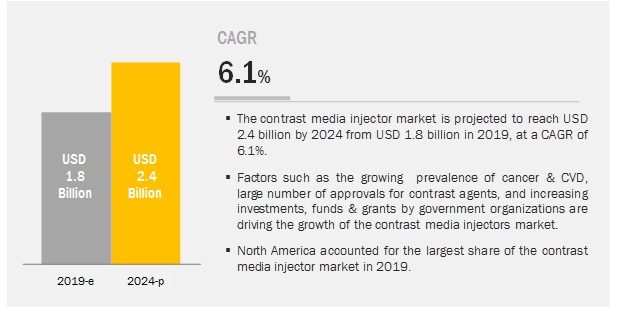 Report Overview:[126 Pages Report] The contrast injectors market is projected to reach USD 2.4 billion by 2024 from USD 1.8 billion in 2019, at a CAGR of 6.1% during the forecast period. The major factors driving the growth of the contrast media injectors industry includes a large number of approvals for contrast agents, increasing investments, funds, and grants by government organizations, and rising demand for early diagnosis and widening the scope of clinical applications. However, the reluctance to adopt new technologies, and a shortage of trained professionals, will challenge market growth.

Based on the product, the contrast media injectors market is segmented into injector systems, consumables, and accessories. The consumables segment is expected to witness the highest growth rate during the forecast period. The high growth rate in this segment can be attributed to the growing requirement of consumables to maintain safety and hygienic conditions during diagnostic procedures.

The diagnostic imaging centers had the second largest market share of the contrast media injector end-user market during the forecast period.

North America accounted for the largest share of the Contrast Media Injector market in 2018, while the Asia Pacific market is expected to register the highest growth during the forecast period

Geographically, the contrast media injector market is segmented into North America, Europe, Asia Pacific (APAC), and the Rest of the World. Asia Pacific is expected to grow at the highest CAGR during the forecast period, primarily due to factors such as the rising R&D investments and favorable demographic scenario in China, rising aging population and cancer incidence in Japan, growing investment in the Indian radiology market, and increasing focus of market players & increasing government support to strengthen healthcare service delivery in other countries are driving the growth of this regional segment. 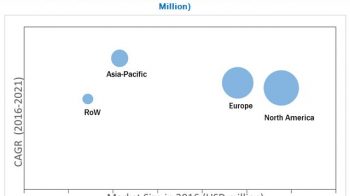