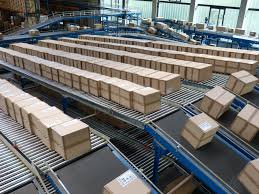 According to a presentation by Del Deur of TGW Logistics Group (Austria) and Tim Kraus of Honeywell Intelligrated (US), the electricity cost accounts for 95.0% of the total lifetime cost of a conveyor system. Green conveyors are a threefold concept, which involves lower energy consumption, minimizing the amount of material used in conveyors, and maximizing the positive human impact of these systems such as lower noise and increased safety for the employees. Green conveyors help manufacturers save money and address the pressing problem of climate change by lowering carbon emissions. Various companies have now started realizing the importance of greener products and have introduced green conveyors in their product portfolios. For instance, in 2015, Jervis B. Webb Company, a subsidiary of Daifuku, launched a baggage handling conveyor system. The green conveyor reduces energy consumption by 40% compared to traditional motor conveyors. These energy-saving conveyor systems can also be a product differentiator for suppliers as their product would result in energy-saving and reduce the carbon footprint for clients using conveyors systems for their daily operations.

The airport is estimated to be the fastest-growing market for conveyor system. In the airport industry, the increasing passenger traffic at airports has accentuated the need for expansion, modernization, and development of new airports. For instance, the Beijing Daxing International Airport (China) is currently under construction and is expected to be functional by 2019. Similar developments are currently underway in India, which plans to open four new airports to air traffic in 2019-2020. Hence, the airport would be an important market for conveyor manufacturers in the coming years. North America and Europe have developed regions, and there is very limited scope for new developments. However, the expansion of existing airports can provide an opportunity for conveyor manufacturers.

Overhead conveyors are estimated to be the fastest-growing market, by conveyor type, during the forecast period. An overhead conveyor system offers many advantages with its ability to transport products, pieces, or parts in unused plant spaces above the work area. Overhead conveyors are mainly used in the automotive industry to lift car cabins into the paint shop for painting. In addition, overhead conveyors are also used in industries such as food and beverage, especially meat and poultry, apparel retail, paper, and tissue. The Asia Pacific is one of the fastest-growing markets for processed food and automotive manufacturing. The growth of these two industries would create a good opportunity for conveyor manufacturers in the region.

Don’t miss out on business opportunities in the Conveyor System Market. Speak to our analyst and gain crucial industry insights that will help your business grow.

Several developing economies have now emerged as promising markets for the manufacturing industry. Different industries such as automotive, retail, and food have successfully adopted strategies to cater to the growing middle-class consumers in these emerging economies. The conveyor system market comprises various products depending on various factors such as the country’s economic condition, population, GDP, and spending choices of the population among others. The Asian and the Middle Eastern countries are currently at the growth stage in the conveyor system market. These emerging markets are expected to be the new revenue pockets for the conveyor system market in the near future.