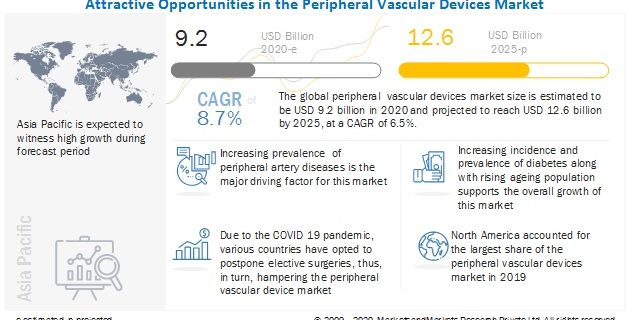 According MarketsandMarkets Research Report – [314 Pages Report] The global peripheral vascular devices market size is projected to reach USD 12.6 billion by 2025 from USD 9.2 billion in 2020, at a CAGR of 6.5% during the forecast period.

Growth in this market is majorly driven by the rapid growth in the geriatric population and the associated increase in the prevalence of peripheral vascular diseases, the approval of new and advanced products, and the rising incidence of diabetes. However, the availability of alternative treatments and product failures and recalls are the major factors that are expected to restrain the growth of this market during the forecast period.

Emerging markets such as China, India, Singapore, and Brazil are expected to witness high growth in the coming years owing to the presence of less-stringent regulatory policies and low competition. To leverage the high-growth opportunities in these markets, manufacturers are strategically focusing on expanding their presence in these countries. Moreover, the increasing competition in mature markets is further compelling manufacturers to focus on emerging markets.

In 2016, Medtronic (Ireland) opened its Asia Pacific regional headquarters in Singapore. This development will support and strengthen the company’s operations in 80 locations across the Asia Pacific region. Moreover, in 2017, iVascular SLU received approval from the Indian government to sell its products in the country. This helped the company in terms of revenue generation as well as expansion in emerging economies.

The demand for medical devices in emerging countries is growing at a robust rate as compared to developed countries (Source: International Trade Organization). The medical instruments business in emerging countries is increasing rapidly due to the expansion of the private healthcare sector to accommodate the needs of the growing middle-class population and the rising disposable incomes. The middle-class population in the Asia Pacific is expected to increase to 66% by 2030 from 28% in 2009 (Source: OECD). According to the same source, the purchasing power of the middle class is expected to increase to 59% by 2020 from 23% in 2009. As a result of these trends, an increasing number of people in countries such as India and China are now able to afford advanced treatments, including peripheral vascular diseases.

Based on the region, the peripheral vascular devices market is segmented into North America, Europe, Asia Pacific, and the Rest of the World (RoW). In 2019, North America accounted for the largest share of the peripheral vascular devices market. The large share of North America can be attributed to factors such as the increasing prevalence of diabetes, rising aging population, availability of reimbursement, and the presence of all key players. 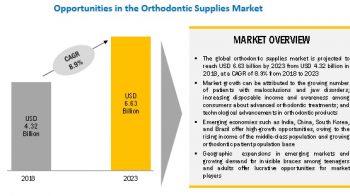 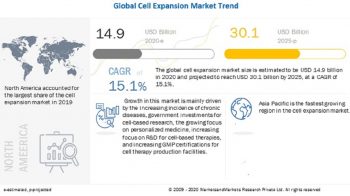