During the last decade, the global Diagnostic Imaging Market has witnessed significant technological advancements and robust product developments. The market is projected to grow at a CAGR of 6.6% during the forecast period. Geographically, this market is segmented into North America, Europe, Asia-Pacific, and the Rest of the World (RoW).

The North American Diagnostic Imaging Market is expected to account for the largest share of the diagnostic imaging market in 2016, owing to increasing geriatric population, high incidence/prevalence of various diseases (such as cancer and CVDs), large number of diagnostic imaging centers and procedures in this region, ongoing research activities, fast adoption of technologically advanced imaging systems, and increasing awareness of the benefits of early diagnosis of diseases. However, the Asia-Pacific region is expected to grow at the highest CAGR during the forecast period. Growth in this market is fueled by increasing incidence of chronic diseases, rising awareness of the benefits of early disease diagnosis, improvement of healthcare systems, increasing medical tourism in APAC countries, growing government initiatives for the modernization of healthcare infrastructure, and the rising number of ongoing research activities.

The key players in this market are focused on strengthening their position in emerging markets by adopting both organic and inorganic growth strategies. For instance, in December 2016, Hitachi entered into an agreement to acquire 75% shares of Kurt & Kurt (Republic of Turkey), a provider of medical diagnostic systems and solutions in Turkey and Central Asia. The company is expected to become a wholly-owned subsidiary of Hitachi by April 2017. Likewise, in November 2016, Hitachi entered into an agreement with Ningbo Jansen NMR Technology Co. Ltd. (China) to develop a high-performance MRI magnet and subsystem, which will be available globally.

In addition, emerging markets such as China, India, Brazil, and Mexico are expected to offer significant growth opportunities for market players owing to the growing incidence and prevalence of chronic diseases like cancer, increasing geriatric population, and rising focus of market leaders in these countries. According to 2012 WHO estimates, annually, more than 60% of the total number of new cancer cases occurs in Africa, Asia, and Central and South America. These regions account for 70% of the global cancer deaths. Similarly, the number of cancer patients diagnosed annually in China is expected to increase by 20% during 2012–2020, to reach ~3.8 million in 2020 (Source: GLOBOCAN). 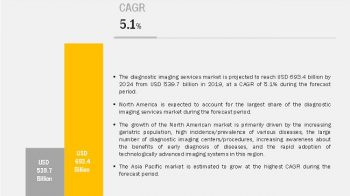