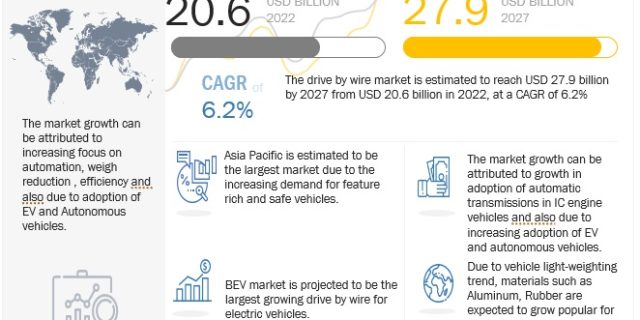 The automotive drive-by-wire market is estimated to grow from USD 20.6 billion in 2022 to reach USD 27.9 billion by 2027 at a CAGR of 6.2% during the forecast period. The market growth is seen mainly due to the developments in autonomous vehicles and increasing demand for luxury vehicles. Stringent emission and safety standards are also boosting the demand for drive-by-wire systems globally.

Steer-by-wire is the most advanced and newest drive-by-wire system. Though the adoption is minuscule, steer-by-wire finds higher installation in sports vehicles and very high-end models. This system helps improve the operation of the steering systems by making them with nomechanical linkages. The installation of the steer-by-wire system increases space. It reduces weight compared to the conventional steering mechanisms, resulting in drastic weight reduction and increased fuel and vehicle efficiency. The system also improves cabin noise control and provides high sensitivity and accuracy. The penetration is restricted to Europe and North America in high-end models. However, the penetration is expected to increase in the coming years owing to developments and innovations. The probable advantages of steer-by-wire are improved vehicle driving dynamics, vehicle maneuverability, and the ability to easily install that system without taking up much space.

Throttle pedal sensor is expected to have the largest market during the forecast period. An electronic throttle is can be easily linked to other systems, such as engine control, traction control, electronic stability control, and cruise control. But in the absence of a throttle position sensor, it would be difficult for the engine control module to monitor the amount of fuel needed or be able to time the ignition effectively, causing the engine to surge or stall. Hence, the throttle position sensor is an important component of the throttle by -by-wire system. North America and Europe have the highest penetration of throttle position sensors. Asia Pacific is the fastest growing market, particularly China, considering the stringent emission standards being implemented for trucks and buses. Thus, with the implementation of stringent emission norms across the worldwide, throttle-by-wire is expected to become a standard requirement, thereby driving the throttle position sensor market.

Asia Pacific will lead the drive-by-wire market during the forecast period. Since Asia Pacific amounts to almost half the vehicles produced globally, there is a growing demand for vehicles with the latest technologies, which include X by wire, ADAS, etc. This can be attributed to this region being home to some of the major automobile markets and houses some of the leading global automobile manufacturers. Consumers are becoming more aware and prefer EVs, SUVs, and pickup trucks with advanced features. This is expected to boost the penetration of drive-by-wire in the future. Also, emissions-related and safety mandates will compel manufacturers to reduce the weight of vehicles. For instance, TATA Altroz DCA, Skoda Octavia, Volvo XC 40 and Mercedes CLA class are some of the vehicles with Shift by wire technology. Thus, stringent safety mandates, developments in autonomous and semi-autonomous vehicles and demand for enhanced features is expected to boost drive by wire market.