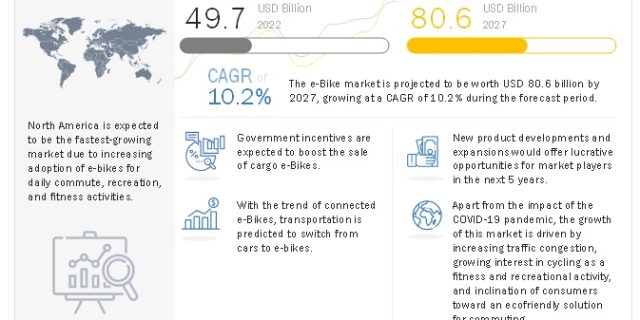 The e-Bike market size is projected to reach USD 80.6 billion by 2027 from an estimated USD 49.7 billion in 2022, at a CAGR of 10.2% from 2022 to 2027. The market is expected to witness growth due to the development of infrastructure for e-Bike cycling paths, adoption of the micro mobility solutions, tax benefits and subsidies given by various governments to promote and create awareness about the usage of e-Bike.

With the growing popularity and usage of e-Bikes, the mountain e-Bike segment is expected to register the growth rate of 17.1% from 2022 to 2027. There has been a growing inclination of riders for the off roading and recreational activities for leisure purpose. Post-COVID-19 scenario, many European countries like Austria, Switzerland, Germany, Spain, and Norway are developing holiday packages with the growing craze for off-road recreational activities. Many major players in global market like as Accell Group N.V (Netherlands), Pon.Bike (US), Merida Industry Co., Ltd (China), Giant Manufacturing Co., Ltd (Taiwan) and Yamaha Motor Company (Japan) are focusing on developing the products for mountain segment e-Bikes due to the growing demand.

The Class-I segment of e-Bikes is boosting the e-Bike market. The government regulations for speed limit in different countries, especially in Europe and Asia Oceania, which are the major markets for e-Bikes, are major factors contributing to the demand for Class-I e-Bike segment. Some of the examples of Class-I e-Bikes include the Verve+ Series by Trek Bicycle Corporation (Wisconsin, US), S-Works Turbo Kenevo SL by Specialized Bicycle Components Co Ltd (Morgan Hill, US), and Townie Path Go Series by Electra (US), and others. According to MarketsamdMarkets statistics, nearly 90-95% of the e-Bike market is estimated to be dominated by the Class-I e-Bike segment in 2022.

North America is estimated to be the fastest growing market for e-Bikes from 2022 to 2027 due to the increase in adoption of e-Bikes for daily commute usage by consumers. US and Canada are the majorly contributing to the sale of e-Bikes in North America. North America has witnessed a boost in e-Bike sales in 2020-2021 after the situations started to regularize due to increased vaccination rate post Covid-19. With the increased attraction for recreational activities, the mountain e-bikes segment is estimated to grow the fastest in North America by 2027. The quest to maintain the ecosystem and reduce the release of toxic elements into the atmosphere and carbon footprint is significant for the rapid response to North American e-Bike adoption. In an effort to reduce emissions, governments in North America are offering incentives to purchase cargo e-Bikes. These factors would increase the demand for e-Bikes in North America by 2027.