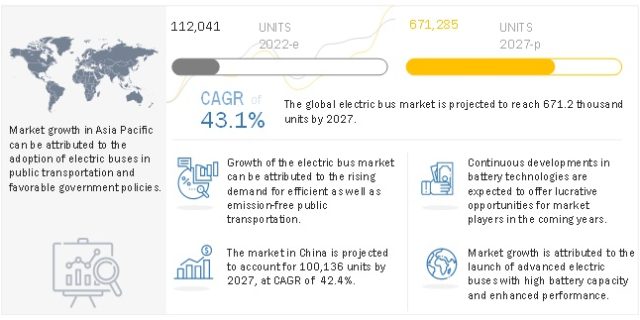 The Global Electric Bus Market size is estimated to be 112,041 units in 2022 and expected to reach 671,285 units by 2027 and grow at a CAGR of 43.1% over the forecast period (2022 – 2027). Increasing focus of countries on promoting electrification of mass transit solutions and government support are propelling the growth of the market.

The growth of the electric bus market can be attributed to the increasing focus of countries on electrification of their public transport fleets with subsidies and favorable regulations due to emission concerns. Advancements in battery pack technologies, declining battery prices, government support, huge subsidies along with tax exemptions, and innovations in electric powertrains are some of the major factors driving the growth of the electric bus and coach industry.Factors such as rise in pollution and environmental hazards, stringent government regulations, and stiff competition have compelled automotive OEMs to introduce fuel-efficient and environment-friendly buses and coaches. Thus, the electric bus market is expected to witness significant growth in the future.

In the electric bus market, by length of bus, the 9–14 m segment is projected to be the largest market during the forecast period in terms of volume. The 9–14 m segment is dominating the electric bus segment due to the large volumes of electric passenger buses used in public transport fleet. Most of the public transport fleets, especially in China, which accounts for almost 99% of the market have electric buses that are 9–14 m in length. Also, many of the leading OEMs such as BYD, Proterra, and Yutong have been providing electric buses in the 9–14 m length range. This is the highest adopted length segment in electric buses. The driving factor for this is the battery capacity is ideal for intercity travel. These buses can travel up to 350 km on a single charge and are capable of carrying >350 kWh battery pack. OEMs are focusing on this segment for new product launches, and large supply orders are coming for this particular bus length. BYD offers K8 and K9 electric buses between 9 m and 14 m in length and a range of 155 miles and 190 miles. In 2019, Yutong (China) received a contract from Keolis Norge (Norway) for 88 units of the Yutong E12 e-bus model, intended for use in the Norwegian public transport system. The Yutong E12 model is a 12 m electric bus model having a 300 km operational range on a single charge. Countries that are planning to replace existing public fleets with electric ones are considering electric buses of the same lengths as well.

The North America which includes US and Canada is projected to be the fastest-growing market during the forecast period. The increasing demand for electric mass transit solutions, renowned OEMs expanding in the region, and government support are factors driving the North American electric bus market. The adoption rate of electric vehicles in these regions is emerging and they can be considered as new revenue pockets for the electric bus segment. Countries in these regions are implementing the electric bus technologies for public and private transportation options. For instance, In 2019, Federal budget of US announced USD 130 million to accelerate zero emission buses and vehicles deployment. Also, Funding for hydrogen-powered vehicles and refueling infrastructure was announced in Pennsylvania. . In January 2022, Motor Coach Industries (MCI) received a new order from Universal Coach Line for one battery-electric, forty-five-foot MCI J4500 CHARGE coach. Sales and taxes for alternative fuel vehicles, including hydrogen-fueled vehicles, were exempted in Washington. Schemes like these by the government are incentivizing the electric bus market in the North American region. Further, OEMs are also launching new variants of electric buses for other applications such as school buses. For instance, in March 2021, the Blue Bird delivered its 400th electric school bus in North America. The company expects to have 1,000 electric school buses delivered by 2022. A rising number of similar developments indicate that the electric bus market in North American will grow exponentially in future.