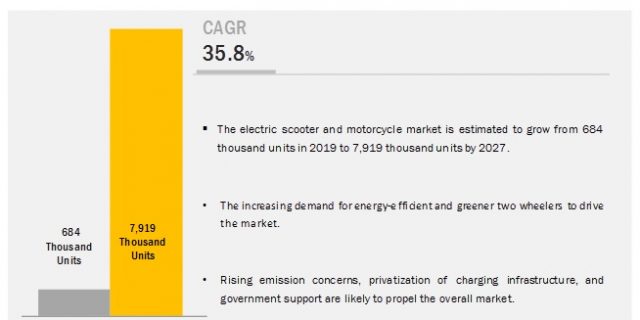 The Electric Scooter and Motorcycle Market is expected to grow from 684 thousand units in 2019 to reach 7,919 thousand units by 2027, at a CAGR of 35.8%. The growing trend of greener transport is the major factor responsible for the expected advancements in this market. OEMs worldwide are investing heavily in research & testing applications leading to continuous advancements in electric two-wheelers and charging solutions. In March 2019, Harley-Davidson, the US-based two-wheeler manufacturer, announced that it had acquired StaCyc, manufacturer of the 12 EDRIVE and 16 EDRIVE electric two-wheelers, predominantly designed for kids. The acquisition broadens the electric two-wheeler portfolio to grow the next generation of Harley-Davidson Riders and lead the electrification of two-wheelers.

In the electric scooter and motorcycle market, by vehicle type, the e-scooter/moped segment is estimated to be the largest. Initially, the e-scooters/mopeds were introduced as their design and frame are more suitable to incorporate the overall electric propulsion system. Subsequently, advancements in the battery and overall system have gradually lifted the e-motorcycle segment as well. The demand for affordable, energy-efficient, and greener vehicles is driving the e-scooter/moped segment in the global market, especially Asia Pacific. Decreasing battery prices would boost the overall electric scooter and motorcycle market in the future.

The European region is estimated to be the fastest-growing market during the forecast period. The region is a hub to major players such as Energica, Piaggio, KTM, BMW, and GOVECS. Europe is a key region for innovations, significant R&D, and technological advancements in electric vehicles and charging infrastructure. Belgium is the largest market in Europe, followed by France. Belgium, which is providing subsidies to buyers up to EUR 1500 on electric two-wheelers, is one of the reasons for the higher adoption rate in the country. The increasing demand for emission-free two-wheelers and favorable government initiatives in the region are driving the electric scooter and motorcycle market in Europe.

The Asia Pacific region is the largest electric scooter and motorcycle market in the world. This market has witnessed rapid year-on-year growth. It comprises some of the fastest developing economies in the world such as China and India. The countries have dedicated plans for expanding advanced charging infrastructure in the coming years. The governments in these countries have recognized the growth potential of electric vehicles and the positives of using them. This has led to an increase in government investments and favorable initiatives, including tax exemption and incentives. Increasing demand for energy-efficient commuting media will have a positive impact on the electric scooter and motorcycle market in Asia Pacific.