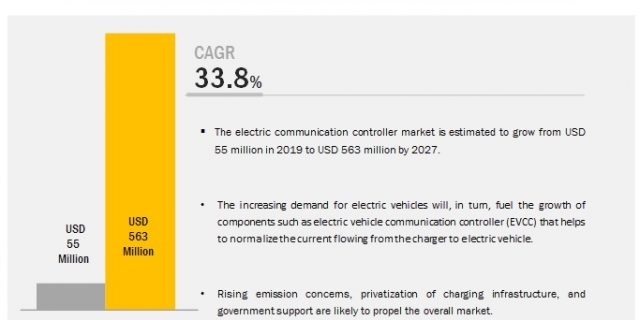 The Electric Vehicle Communication Controller Market is expected to grow from USD 55 million in 2019 to USD 563 million by 2027, at a CAGR of 33.8%. The growing demand for greener transport is the major factor driving the growth of this market. Heavy investments by OEMs worldwide in research & testing applications have led to continuous advancements in electric vehicles, batteries, and charging solution equipment. In November 2018, LG Innotek developed the V2X Full Module for connected cars and autonomous vehicles. In addition to having the wireless communication ability enough for commercialization, this device can be equipped into any part of a vehicle because of its excellent durability and minimized size, enhanced from the 1st generation models. V2X helps in the sharing of information such as traffic conditions between vehicles, vehicle and infrastructure, and vehicle and pedestrians.

In the electric vehicle communication controller market, by vehicle type, the passenger car segment is estimated to be the largest. This segment includes sedans, hatchbacks, station wagons, Sports Utility Vehicles (SUVs), Multi-Utility Vehicles (MUVs), and other car types. The passenger car segment of the electric vehicle market is growing at a significant rate in emerging economies in the Asia Pacific region. The market growth in the region can be attributed to a rise in the GDP and population, improvement in lifestyle, increased purchasing power of consumers, and development of infrastructure. The market for EVCC is expected to grow significantly in the commercial vehicle segment as well, as these vehicles are used for transporting and delivering heavy loads over long distance and require high range and reliability. EVCC will play a crucial role in these vehicles as it will help in fast charging of the vehicle.

The Asia Pacific region is estimated to be the largest and fastest growing market during the forecast period. The region has witnessed several innovations, significant R&D, and technological advancements in electric vehicles and charging infrastructure. It comprises some of the fastest developing economies in the world such as China, Japan, and India. The governments of these developing economies have recognized the growth potential of the electric vehicle market and, hence, have taken different initiatives to attract major OEMs to manufacture electric vehicles in domestic markets. For instance, the Government of India, to increase the adoption of electric vehicles, has announced plans for financial support—a zero-rated goods and services tax (GST) for a window of 3 years for EVs and a scheme called Faster Adoption and Manufacturing of Hybrid and Electric Vehicles (FAME). Market experts predict EVs would account for around 50% of the market share in China by 2025, which would drive the growth of the Asia Pacific market. China is estimated to be the largest market as it has the ability to manufacture EVs in mass volume. The increasing popularity of compact EVs will propel the market for EVCC in the future. 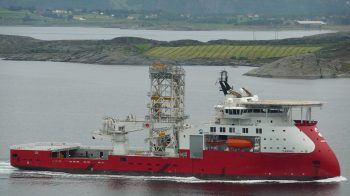