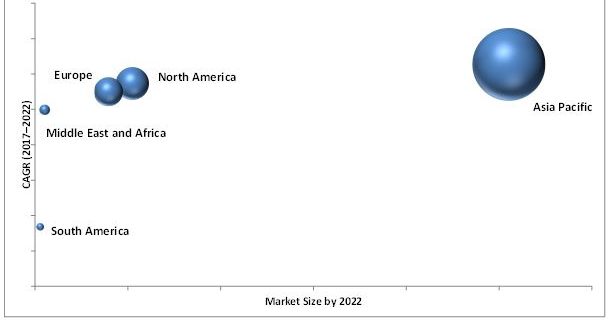 The Ethylene Carbonate Market is projected to grow from USD 264.8 million in 2017 to USD 355.1 million by 2022, at a CAGR of 6.0% in terms of value from 2017 to 2022. The growth of the ethylene carbonate market can be attributed to the increasing demand for ethylene carbonate across various applications, such as lithium batteries electrolytes, lubricants, coatings, and plasticizers.

By end-use industry, the automotive segment of the ethylene carbonate market is expected to grow at the highest CAGR during the forecast period. The growth of this segment can be attributed to the increasing demand for lithium battery electrolyte in electric vehicles. In addition, initiatives taken by government bodies to encourage electric vehicles is a major factor contributing to the growth of the automotive industry,

Technological advancements in the end-use industries are fueling the demand for ethylene carbonate in North America and Europe. End-use industries, such as automotive and manufacturing are benefited from the development of various applications such as lithium battery electrolyte and lubricants stabilizers in terms of increasing the efficiency of vehicles and equipment used in these industries.