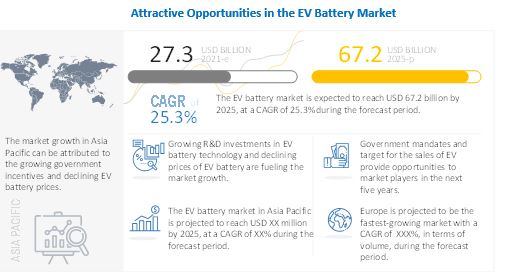 The global EV Battery Market is projected to grow at a CAGR of 25.3% from USD 27.3 billion in 2021 to USD 67.2 billion by 2025. The base year for the report is 2020, and the forecast period is from 2021 to 2025. With the increasing stringency of government mandates regarding emissions caused by vehicles, the automotive industry focuses on efficiency, emission-free propulsion, and innovative technologies. The increasing adoption of electric vehicles and improved charging infrastructure (in terms of network, charging technologies, and capacity) in countries is expected to boost the EV Battery Market in the coming yearst.

In the EV Battery Market, by material type, the lithium segment is expected to capture the largest market share during the forecast period. This can be attributed due to the use of lithium as a material in batteries undergoes several developments and supply contracts, which adds to its high penetration in the market. Panasonic is one of the major players in this market. As a supplier to Tesla and Toyota, the company deployed more lithium batteries in 2019 than all of its competitors globally. CATL quadrupled its lithium batteries deployment year-over-year to 4,800 tons in 2019. In 2020, CATL also successfully tested its liquid cooling battery energy storage system (BESS) based on lithium iron phosphate and cleared all the safety test.

Asia Pacific presents a significant growth opportunity for EV batteries as it is expected to be the largest market during the forecast period. The region is not only home to top players of the market such as Panasonic, LG Chem, Samsung, and CATL but also many OEMs that are dominating the global EV market. Japan also plays a vital role in battery technology in Asia Pacific. With advancements in technologies such as BEVs and PHEVs, the Japanese EV Battery Market is expected to grow. In October 2020, China’s BYD and Hino Motors from Japan entered into a joint venture to set up a new company in China in 2021 for the development of commercial battery electric vehicles. Also, China imported 50,102 tons of lithium carbonate in 2020 according to customs data. This non-cobalt trend in the power battery industry of China, which accelerated in 2020 following initiatives by US electric vehicle (EV) producer Tesla and Chinese auto manufacturer BYD, has boosted the developments in the LFP battery sector. Already, the country’s production and sales of new energy vehicles (NEVs) increased in 2020. The market has begun to recover in the second quarter of 2020 because of the government’s stimulus measures to encourage the use and purchases of NEVs, following Covid-19 disruptions in the first quarter. These factores are expected to boost the EV Battery Market in the region.

Europe is estimated to be the second largest EV Battery Market during the forecast period. Major battery manufactures have been expanding their networks in the European region that has allowed significant growth of EVs and batteries. For instance, in 2017, Samsung SDI has invested about USD 1.3 billion to expand its factory in Hungary. This allowed Samsung to start production in 2018 on the Hungary plant, which produced batteries for 50,000 EVs that year.

In the EV Battery Market, by propulsion, the HEVs segment is projected to lead during the forecast period. Batteries used in these vehicles are cost-effective and offer improved charging times. Governments around the world are undertaking initiatives to encourage the adoption of non-polluting vehicles. All these factors fuel the growth of the HEVs segment. A large number of HEV car models are similar to their ICE counterparts, as only certain components like the battery and related systems are added to them. Only a handful of companies were manufacturing them when BEVs came into the market, hence, prominent models are distinct from other ICE models. Prominent examples of HEVs are Tesla Roadster, Tesla Model 3, Daimler eCitaro, and Jaguar I-Pace.