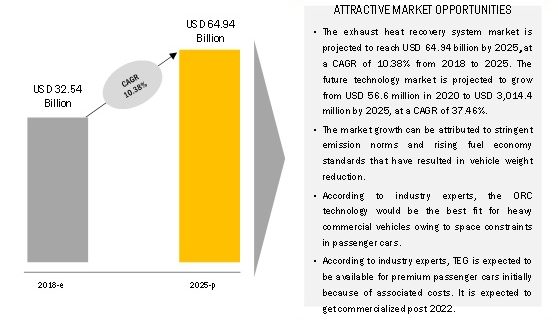 The report “Exhaust Heat Recovery System Market by Technology (EGR, Turbocharger, ORC, TEG), Component (EGR Valve & Cooler, Turbine, Compressor, Evaporator, Condenser, TEG Module), Vehicle (PC, LCV, Truck, Bus, Hybrid, OHV) and Region – Global Forecast to 2025″, The global exhaust heat recovery system market, in terms of value, is expected to grow at a CAGR of 10.38% during the forecast period. The market in 2018 is estimated to be USD 32.54 billion and is projected to reach USD 64.94 billion by 2025. Technologies such as EGR and turbocharger help in achieving reduced emissions and improvement in performance of the vehicle without influencing the vehicle performance. The growth of the exhaust heat recovery system market is influenced by factors such as the increasing production of commercial vehicles where turbochargers and EGR are standard fitments. Even future technology like ORC is expected to get commercialized for commercial vehicles first. In addition to that, due to stringent emission norms, EHRS technologies are getting rapid acceptance in gasoline vehicles too.

“Hybrid electric vehicle segment is projected to be the largest and fastest growing market for EHRS, by electric and hybrid vehicle type”

The increasingly stringent vehicle emission control regulations imposed by governments, growing environmental concerns, volatile oil prices, and increasing consumer awareness about hybrid vehicles are causing a paradigm shift in the automobile industry. Automotive OEMs and tier-1 are investing a huge amount of money in research and development to improve the efficiency of hybrid vehicles by developing new and efficient technologies like the exhaust heat recovery system. The hybrid vehicle has more scope for heat recovery as it has both ICE engine and batteries. The technologies like thermoelectric generator can reuse the heat from the batteries and it can be converted into electricity for auxiliary purposes. Due to the scope of heat recovery, hybrid vehicles are expected to be the largest market for the exhaust heat recovery system.

“Passenger car is projected to be the largest and fastest growing market for EHRS, by vehicle type”

“EGR cooler is projected to be the largest market for EHRS, by component”

EGR consists of 2 components, namely, EGR valve and EGR cooler. EGR cooler cools the exhaust gases before they are recirculated into the intake manifold, which reduces the combustion temperature, preventing valve clatter, and detonation. Since NOx gases are mainly produced at a high temperature, EGR cooler allows a reduction in the NOx gas generation. EGR cooler contributes the major share of the total EGR cost, which is higher than other components. Due to these reasons, EGR cooler is expected to be the largest market for EHRS. EGR coolers are more costly for heavy-duty vehicles as the temperature of exhaust gas is very high compared to that in passenger cars and LCVs.

Don’t miss out on business opportunities in Exhaust Heat Recovery System Market. Speak to our analyst and gain crucial industry insights that will help your business grow. 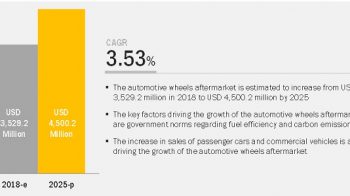 Which factors contribute to the overall growth of automotive wheels aftermarket?