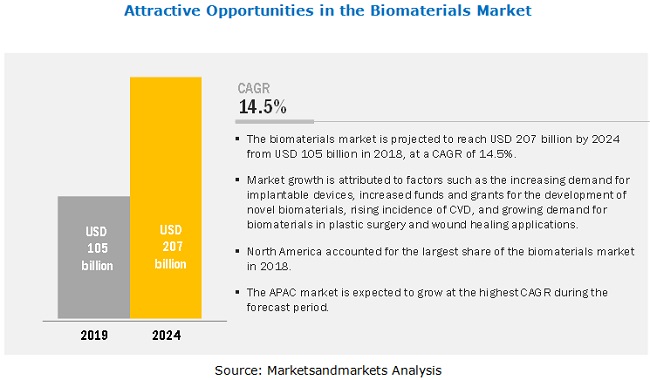 Factors such as the increasing funds and grants by government bodies and universities for the development of novel biomaterials, increasing demand for implantable devices, growing demand for biomaterials in plastic surgery and wound healing applications, rising incidence of cardiovascular diseases, and rising awareness and research on regenerative medicine are driving the growth of the Biomaterials Market during the forecast period.

The metallic biomaterials segment accounted for the largest share of the biomaterials market, by type, in 2018. This is primarily attributed to the wide use of metals in the manufacturing of medical devices used in cardiovascular, dental, and orthopedic applications. It is expected that the rise in geriatric population globally will increase the demand for these devices, as age increases susceptibility to orthopedic, dental, ophthalmological, neurological, and cardiovascular disorders.

In line with this, according to the American Joint Replacement Registry (AJRR), 860,080 hip and knee replacement procedures were performed in the US in 2017. This number is expected to reach 3.48 million procedures per year by 2030.

The cardiovascular applications segment accounted for the largest share of the biomaterials market, by application, in 2018. This is primarily due to the increasing prevalence of cardiovascular diseases, rising geriatric population, growing number of angiography procedures, and the increasing adoption of cardiac stents, pacemakers, and implantable cardiac defibrillators. For instance, according to the World Health Organization (WHO), 17.9 million people die each year from CVDs, which is an estimated 31% of all deaths worldwide. This figure is expected to grow to more than 23.6 million by 2030.

Additionally, a number of diagnostic and therapeutic devices have been developed for cardiac applications. These devices include catheters, guidewires, sensors, pacemakers, implantable cardioverter defibrillators, vascular grafts, heart valves, and stents. Biomaterials are used for the manufacturing of these devices.

Gene Therapy Market worth $ 17.2 billion by 2027 – Exclusive Report by MarketsandMarkets™