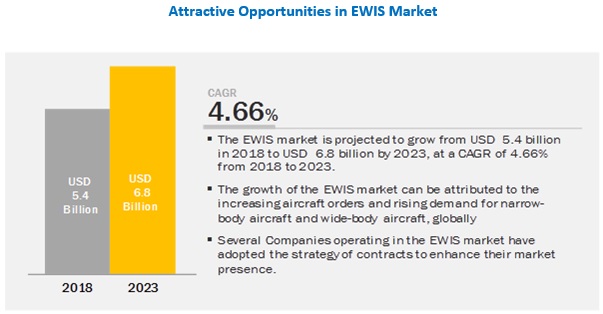 According to the new market research report the EWIS Market is projected to grow from $5.4 billion in 2018 to $6.8 billion by 2023, at a CAGR 4.66% from 2018 to 2023. The study involved four major activities to estimate the current size of the Electrical Wiring Interconnection System market. Exhaustive secondary research was done to collect information on the market, the peer market and the parent market. The next step was to validate these findings, assumptions, and sizing with industry experts across value chain through primary research. Both top-down and bottom-up approaches were employed to estimate the complete market size.

Based on application, the EWIS market has been segmented into propulsion, airframe, interiors, avionics, and others. The interiors segment is projected to grow at the highest CAGR during the forecast period. The growth of this segment can be attributed to the need for enhancing passenger travel experience and upgradation of existing aircraft with new IFE systems.

The major players in the EWIS market include Safran (France), GKN Aerospace (UK), Latécoère (France), TE Connectivity (Switzerland), Ducommun (US), and Amphenol Corporation (US), among others. The recent developments section of the report includes information on new products launched by various leading players of the market and contracts received by them between March 2014 and October 2018.