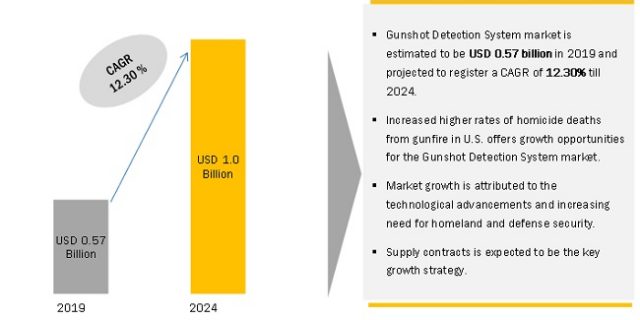 The Gunshot Detection System (GDS) market report provides an analysis of the market from 2019 to 2024. It discusses industry and technology trends prevailing in the market, along with the market drivers, restraints, challenges, and opportunities. The gunshot detection system market is projected to grow from USD 564 million in 2019 to USD 1,008 million by 2024, at a CAGR of 12.30% from 2019 to 2024. The gunshot detection system market in North America is expected to witness substantial growth during the forecast period due to the upgradation of security system in existing infrastructures such as universities, public banks, and corporate offices, among others. The rise in gun ownership and illegal firearms market are the factors that have led to rising crime rate across this region.

Among installations, the fixed installations segment is projected to witness the highest growth during the forecast period. Major US cities are planning to install indoor gunshot detection systems at universities, corporate office locations, and financial facilities, among others, over the next 5 years. GDS installations in the perimeters of the cities will help detect gunshot incidences.

In terms of geographic coverage, the gunshot detection system market has been segmented into 5 regions, namely, North America, Europe, Middle East, Asia Pacific (APAC), and Rest of the World, which includes Latin America and Africa. North America is estimated to account for the largest share of the gunshot detection system market in 2019. Countries in North America, such as the US do not have strict gun control laws. The people to gun ratio in these countries is very high. Moreover, increasing incidences of gunfire and homicides within these regions, is driving the GDS market.