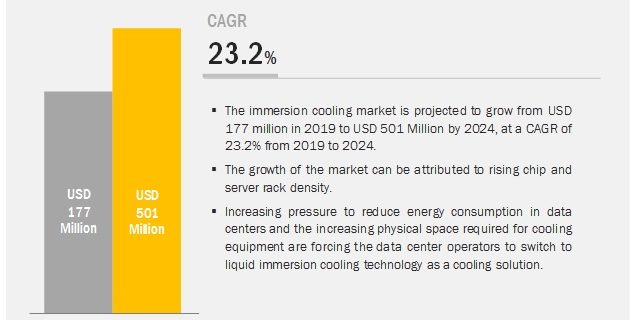 The immersion cooling market is projected to grow from USD 177 million in 2019 to USD 501 million by 2024, at a CAGR of 23.2% from 2019 to 2024. Increasing server rack density & chip density, new IT use cases including harsh edge computing environments, and pressure to reduce energy consumption in data center cooling is expected to drive the immersion cooling market over the next few years.

Changing IT equipment technology has always driven the development of new infrastructure solutions. Although liquid cooling has been deployed for several years in mainframes and High Performance Computing (HPC), the emergence of the present technologies, such as cloud, IoT, AI, cryptocurrency mining, and edge applications are once again resulting in IT technology changes, which is enforcing a renewed look at liquid cooling, specifically, immersion cooling and the development of new technologies. Increasing focus on data center energy efficiency and sustainability is also placing increased pressure on the data center industry to develop and adopt efficient cooling infrastructure, such as liquid immersion cooling.

Based on application, the market is classified into high performance computing, edge computing, artificial intelligence, and cryptocurrency mining, among others. Among the various applications, the high performance computing segment is estimated to account for the largest revenue share in 2019, followed by the cryptocurrency mining segment driven by the increasing usage of immersion cooling by small and large crypto miners. Manufacturers are investing heavily in R&D to develop new immersion cooling solutions that will be suitable for the growing chip densities and could be deployed at the edge.

The heat generated is directly absorbed by the liquid, which, in turn, increases its temperature to become warmer. However, the liquid does not change phase and remains in the same state. Single-phase immersion cooling systems are cheaper to install but tend to reduce server lifespan. These solutions are, therefore gaining demand from data center vendors that utilize servers for shorter time spans.

Asia Pacific, North America, and Europe are significant regional markets for immersion cooling. The Asia Pacific market is expected to witness the fastest growth between 2019 and 2024. The market in this region is experiencing increasing adoption of immersion cooling in all application segments of the respective market.

The market in China is expected to grow at the highest CAGR during the forecast period due to the increasing adoption of immersion cooling by different application segments, such as high performance computing, cryptocurrency mining, and artificial intelligence, among others. Various leading immersion cooling manufacturers have adopted the expansions, new product developments, partnerships, and collaborations strategies to cater to the increasing demand for immersion cooling solutions from various end-use industries. 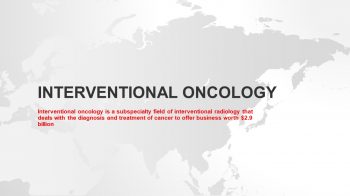