EntomoFarms (Canada) is one of the leading insect technology companies operating in both the food and feed industries. Along with edible insects, the company develops and markets protein products in the Canadian market. It produces approximately 2,500 tons of protein powder for use in both food and feed applications, annually. The company believes in a zero-waste approach and produces frass for fertilizer application. For food application, it develops protein powder from crickets, while for application in the feed industry, the company provides customized solutions.

In 2018, Maple Leaf (Canada), a meat company, invested in EntomoFarms for increasing its production capacity and ventured into the growing insect protein market. Through this investment, EntomoFarms would strengthen its position in the domestic and international markets.

Ÿnsect (France) is an emerging biotechnology company involved in the manufacturing of specialty products for feed and plant nutrition. The company engages in the bioconversion of organic resources by insects and their processing into nutrients for feed and fertilizer applications. Some of these organic resources include polysaccharides and derivatives, organic fertilizers, and bioenergy. The company has vertically integrated operations. The company also engages in breeding insects; sorting their byproducts; processing valuable products such as protein, oil, chitosan, and frass for multiple industrial applications; as well as packaging and distributing products. 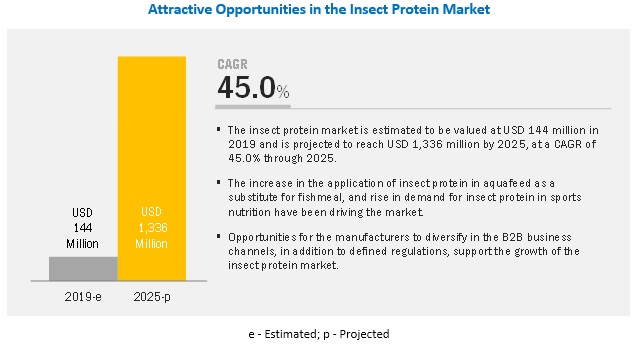 The company launched its lab-scale production of insect protein in 2013, in partnership with multiple research centers, after which the construction of its first commercial plant started in 2017 through multiple funds raised by the company. Ÿnsect owns Ÿnstitute, the world’s leading insect private R&D center dedicated to driving innovative new technologies, products, applications, and know-how.

Protix (Netherlands) is one of the leading insect ingredient companies, with a broad range of offerings based on black soldier flies. The company initiated and founded the International Producers of Insects for Feed and Food (IPIFF), one of the leading associations for insect protein. Protix has been actively tapping the European market for insect protein through both organic and inorganic strategies. The company, recently, in 2017, expanded its portfolio to include other insects such as crickets and mealworms, by acquiring Fair Insects (Netherlands). The company has been entering into partnerships with the leading players in the technology industry intending to enhancing its portfolio and regional presence in Europe. The company not only markets edible insects for animal nutrition but also processes byproducts from insects to provide premium protein-rich products in the market.

In most European and North American countries, human consumption of insects is very low and often considered culturally inappropriate or even taboo. However, considering the growing population in the world and the increasing demand for production of traditional pork, beef, and chicken meat, insects are seriously considered as a source of animal protein. Thus, in these regions, since the acceptance of edible insects is low, manufacturers have been introducing insect protein powder-based products in the form of protein bars, protein powder, pasta, and bakery products. Since the insects are not directly visible to the consumers, such products are easily accepted. Thus, many companies manufacturing insect protein powders have been emerging and are expanding their production capacities in North American and European countries.

Speak to our analyst for a discussion on the above findings@
https://www.marketsandmarkets.com/speaktoanalystNew.asp?id=150067243