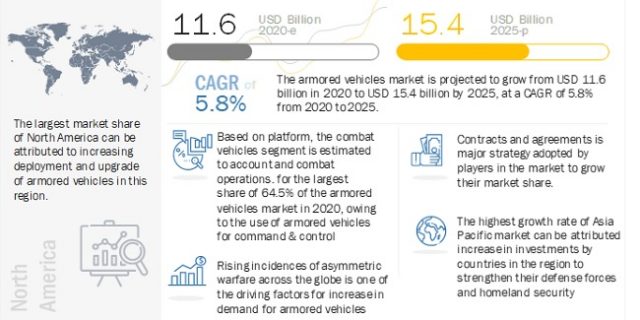 “The combat vehicles segment is projected to lead the armored vehicles market during the forecast period.”

Based on mobility, the market has been segmented into wheeled and tracked. The wheeled segment is projected to grow at a higher CAGR as compared to the tracked segment during the forecast period. Increased demand for 4×4 light armored vehicles by military forces to carry out Intelligence, Surveillance, and Reconnaissance (ISR) activities and transport defense personnel and equipment from one location to another is fueling the growth of this segment of the market.

“The Middle East armored vehicles market is projected to grow at the highest CAGR during the forecast period.”

The break-up of profiles of primary participants in this report:

It maps these segments and subsegments across five major regions, namely North America, Europe, Asia Pacific, the Middle East, and the Rest of the World (RoW). The report provides in-depth market intelligence regarding the major factors such as drivers, restraints, opportunities, and challenges influencing the growth of the armored vehicles market, along with an analysis of micromarkets with respect to individual growth trends, prospects, and their contribution to the overall market.

Reasons to Buy This Report:

From an insight perspective, this research report has focused on various levels of analysis — industry analysis (industry trends), market ranking analysis of top players, supply chain analysis, and company profiles. These insights together comprise and discuss basic views on the competitive landscape, emerging and high-growth segments of the armored vehicles market, high-growth regions, and market drivers, restraints, challenges, and opportunities.