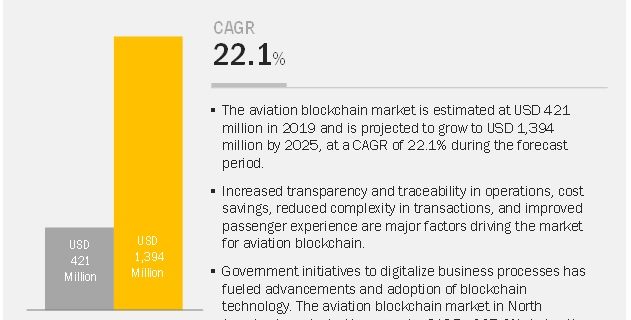 MarketsandMarkets projects the Global Aviation Blockchain Market to grow from USD 421 million in 2019 to USD 1,394 million by 2025, at a CAGR of 22.1% from 2019 to 2025. One of the major factors driving the market growth is the increased traceability and transparency into business operations.

Blockchain technology comprises of a decentralized distributed ledger or database that leverages crowd computing and infrastructure shared across a public or private network. Each computer node in the network holds a copy of the ledger to avoid failure at any single point. Every piece of information is mathematically encrypted and added as a new block to the chain of historical records. This immutable nature can be leveraged for supply chain activities in the aviation industry.

By end market, the airports segment is projected to grow at the highest CAGR during the forecast period. The increasing demand for optimizing airport operations to bring in transparency and reduce aircraft turnaround is driving this segment. Airlines, MRO, manufacturers, and lessors are expected to gain advantage through the use of blockchain as it will help reduce documentation time and ease the transaction process.

By function, the record-keeping segment is estimated to lead the aviation blockchain market in 2019, owing to the increasing volume of online transactions. Blockchain’s basic feature is immutability, which is an important aspect while performing transactions. Airlines and manufacturers are looking toward smart contracts, which automatically makes payment on completion of a set criteria.

By deployment, the hybrid segment is expected to lead the aviation blockchain market during the forecast period. Hybrid blockchain is mostly used for supply chain management wherein there exist multiple stakeholders. Hybrid blockchain enables access to vendors on a case-to-case basis.