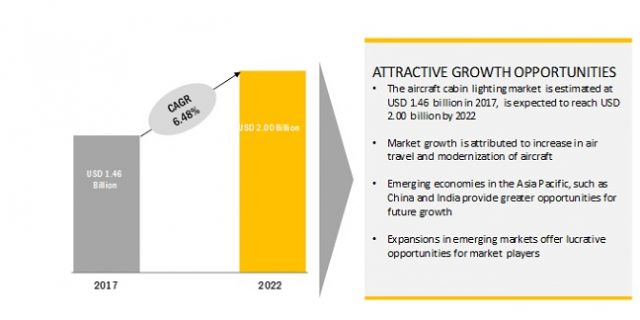 The Aircraft Cabin Lighting Market is projected to grow from an estimated USD 1.46 billion in 2017 to USD 2.00 billion by 2022, at a CAGR of 6.48% during the forecast period. This growth can be attributed to factors, such as increased demand for interior light systems, as most of the airlines are upgrading their cabin interiors to increase efficiency and provide better service to passengers. However, the lack of profitable airlines in emerging economies is expected to restrain the growth of this market.

Based on end user, the aftermarket segment is projected to account for the larger share of the aircraft cabin lighting market during the forecast period.

Based on aircraft type, the wide body aircraft segment is projected to grow at the highest CAGR during the forecast period.

Based on aircraft type, the wide body aircraft segment is projected to grow at the highest CAGR during the forecast period. The growth of this market can be attributed to the demand for enhancing passenger experience in commercial aircraft and due to increase in deliveries and order of wide body aircraft by major airlines across the world.

Aircraft and component manufacturers are undertaking efforts to develop new technologies that benefit both, the airlines and passengers, and make air travel more comfortable. For instance, in February 2017, Lufthansa introduced a new aircraft interior lighting technology developed for the Airbus 350-900. This new technology provides the capability of 24 lighting variants for the comfort of passengers, and their functions are based on the biorhythms of passengers on board. Lufthansa has equipped 10 aircraft with this technology and plans to equip its Boeing 747-800s with the same.