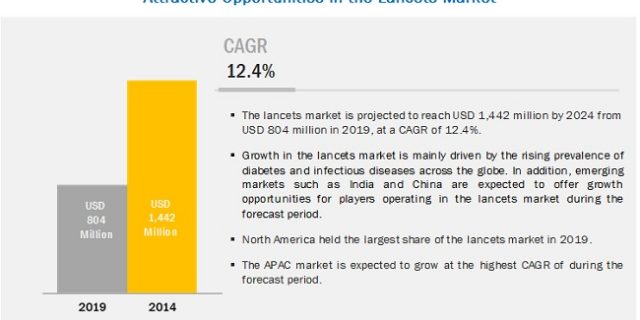 According to the new market research report ‘Lancets Market by Type (Safety Lancets (Push button, Pressure Activated, Side Button), Personal Lancets), Application (Glucose Testing, Hemoglobin Testing), End User (Hospital, Clinic, Homecare), Region – Global Forecast to 2024′, published by MarketsandMarkets™, is projected to grow at a CAGR of 12.4% during the forecast period to reach USD 1,442 million by 2024 from USD 804 million in 2019.

The Factors such as the growing prevalence of diabetes and the high prevalence of infectious diseases are driving the growth of the Glucose Lancets Market during the forecast period.

The glucose testing segment accounted for the largest share of the Lancing Devices Market, by application, in 2018. This is primarily due to the increasing prevalence of diabetes, and the need for its prevention and management. For instance, according to the International Diabetes Federation (IDF), in 2017, there were almost 425 million people suffering from diabetes worldwide, and this figure is expected to increase to 629 million by 2045. The growing prevalence of diabetes has resulted in the increased adoption of lancets to effectively handle the growing patient pool.

Asia Pacific to dominate the Lancets Market during the forecast period

In 2018, North America dominated the Lancing Devices Market, followed by Europe. Increasing prevalence of diabetes and favorable reimbursement scenario in the region are the factors propelling the growth of the market in the region.

The Asia Pacific region is projected to register the highest growth rate in the global Lancet and Lancing Devices Market during the forecast period. This is primarily attributed to the rapid economic growth, rising awareness about diabetes treatment, rising geriatric population in China and India, and Japan’s growing healthcare industry.