The scope of the study is confined to photomultiplier tubes (PMTs), silicon photomultipliers (SiPMs), and others (PIN and avalanche photodiodes); hence, the market size is estimated only for the abovementioned product segments. Radiation monitoring and safety devices are used in nuclear power plants, homeland security and defense, and the biotechnology and healthcare industry, among others.

Growth in the radiation monitoring and safety market is likely to be centered on the Asia-Pacific region. This can be attributed to the high spending on homeland security in Asia, Japan’s decision to continue with the use of nuclear power, high growth expected in China’s nuclear power industry, presence of global and local players in the Chinese market, increasing number of nuclear power plants in India, and increasing installations of nuclear imaging systems in India.

Emerging economies such as India and China are investing in modernization programs for their security infrastructure. The Chinese government has mapped out a comprehensive plan under its 12th Five-year Plan for nuclear security efforts. China is the only country that spends more on internal security than on national defense. In 2015, the Chinese government released its official defense spending—USD 144.2 billion, an increase of 10.1% from the previous year. This makes China’s military budget the second largest in the world, behind the U.S. India offers huge potential for SiPM manufacturers, as the homeland security sector in the country is expected to undergo upgrades owing to its healthy GDP growth and increasing terrorism threat. In March 2015, the Indian government increased its defense budget to USD 39.8 billion for 2015-2016, as compared to USD 35.86 billion for 2014-15. Moreover, in September 2015, a U.S.-India Joint Declaration on combating terrorism was signed into existence.

In early 2014, Japan’s Ministry of Economy, Trade, and Industry stated that the country was facing an energy crisis and the reliance on imported oil was adversely affecting the economy. Therefore, the Japanese government reversed its decision to phase out nuclear power. In January 2016, the Takahama Nuclear Power Plant was brought back online; it is expected that about six more reactors in the country will commence operations by 2016. This decision is expected to influence authorities in other countries, which will be a positive development for the global nuclear power industry.

As of February 2016, India was equipped with 21 operational nuclear power reactors. Furthermore, the country has plans to build six more nuclear reactors within the next decade. Moreover, India is entering into agreements for the construction of new nuclear power plants. In January 2016, EDF Energy signed a memorandum of understanding with the Nuclear Power Corp. of India Ltd. (NPCIL) to build six nuclear reactors at Jaitapur, India. The increasing number of nuclear power plants in India is expected to boost the market for radiation monitoring and safety devices.

In India, the increase in government and private investments to improve the country’s diagnostic imaging facilities is positively impacting the demand for photomultiplier tubes and silicon photomultipliers. For instance, in February 2016, a directive was issued by the Jammu High Court to the Commissioner/Health and Medical Education Department to install PET scanners in all government medical colleges of the state within six months. 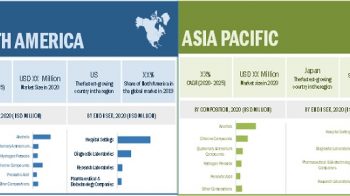