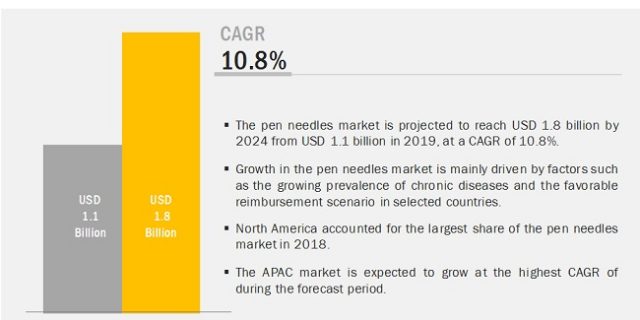 The prevalence of chronic diseases has increased significantly in the last few years. Such diseases-including diabetes, osteoporosis, cardiovascular disease (CVD), and multiple sclerosis-require daily or weekly drug administration, typically using pen injectors. In the rapidly growing market, pen injectors have become the new standard for injectable drug delivery systems. Their popularity has soared due to their simplicity, reliability, and ability to be administered directly by the patient without the aid of a physician. The pen needle, a removable attachment, forms an integral part of the pen injector. The length of the needle and its sharpness is critical to ensure that the medication reaches the target tissues. Thus, the growing prevalence of chronic diseases has led to a greater focus on pen needle technologies to effectively handle the growing patient pool and increase patient compliance with therapies.

The safety pen needles segment holds the highest CAGR during the forecast period.

Based on type, the pen needles market is segmented into standard and safety pen needles. Safety pen needles are seen to be growing at the highest CAGR. Due to the rising awareness regarding the risks associated with blood-borne pathogen transmission, needle safety has become an issue of concern for hospitals, doctors, and patients, thus spurring the demand for safe needles.

Based on the mode of purchase, the pen needles market is categorized into retail and non-retail. The retail segment accounted for the largest share during the forecast period. The significant discounts offered on online/retail purchases of pen needles, high convenience, increasing awareness on pen needles, and the favorable reimbursement scenario in North America and Europe are some of the key factors driving the growth of the retail segment.

The medical industry in the region has grown significantly over the years, and manufacturers are beginning to focus on providing well-established technologies to ensure sustainable and strong future revenue growth. Being a high-growth market, many manufacturers are also extending their global manufacturing bases to the APAC. With the low-cost manufacturing advantage, China and India are regarded as the most profitable manufacturing and R&D locations by most manufacturers. The rising demand for healthcare, driven by the rapid growth in the aging population, the growing prevalence of diabetes and other chronic diseases, drive market growth.