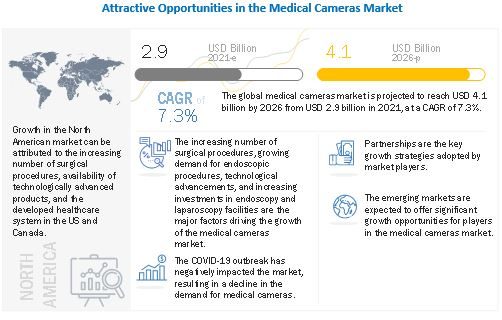 An increasing number of surgical procedures require medical cameras, which has considerably grown in recent years. The growing number of surgeries can be attributed to the rapidly growing geriatric population worldwide and the increasing prevalence of chronic diseases, leading to the increasing demand for medical equipment. Many countries across the world are facing the challenge of increasing senior populations. According to the United Nations (UN), in 2019, there were 703 million persons aged 65 years or over in the world. The senior population is estimated to double to 1.5 billion in 2050. Non-invasive surgeries (mainly using endoscopy and microscopy surgery cameras) are preferred for older people due to lesser complications than conventional surgeries.

The CMOS Sensor segment accounted for the largest market share in 2020.

Based on sensor, segmented into CMOS Sensor and CCD Sensor. CMOS Sensors accounted for the largest share of the global medical cameras market in 2020. This can be attributed various advantages of CMOS sensors over CCD sensors, such as low power consumption, ease of integration, and faster frame rate. Moreover, the cost of manufacturing these sensors is lower than that of CCD sensors.

The High-definition cameras accounted for largest market share in 2020

Based on resolution, segmented into standard-definition (SD) cameras and high-definition (HD) cameras. High-definition cameras accounted for the largest share of the global medical cameras market in 2020. The large share of this segment can primarily be attributed to the greater demand for HD cameras among end users due to the significant requirement of high-quality images in medical specialties.

The medical cameras market is divided into five regions, namely, North America, Europe, Asia Pacific, and Rest of the World. North America dominated the global medical camera market. The large share of the North American region is mainly attributed to the technological advancements in medical cameras, implementation of favorable government initiatives, and rise in the number of surgical procedures.