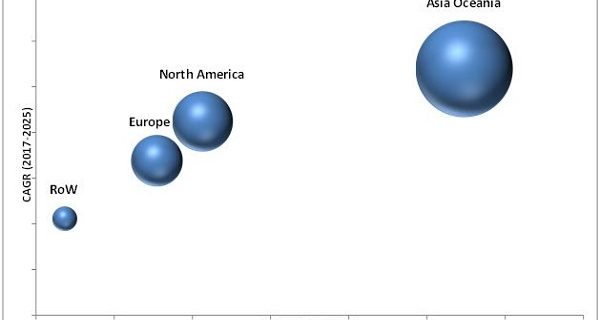 The Metal Casting Market is projected to grow at a CAGR of 8.87% during the forecast period, to reach a market size of USD 39.94 Billion by 2025. The recent trend of vehicle light-weighting, as a result of increasing stringency in emission regulations and fuel efficiency norms, has shifted the focus from traditional iron and steel to HSS and Aluminum. Additionally, growing vehicle production and unavailability of alternative processes for manufacturing of components are expected to fuel the market for metal casting in the near future.

As per Organisation Internationale des Constructeurs d’Automobiles (OICA) statistics, passenger cars accounted for 75.9% of the total vehicle production in 2016. According to MarketsandMarkets analysis, the production of passenger cars is anticipated to reach 107.1 million units by 2025 at a CAGR of 5.74% from 2017 to 2025. Due to the growth in vehicle production, along with existing and upcoming emission regulations (US EPA Tier, Euro, etc.) and fuel efficiency norms such as CAFE, the use of lightweight materials such as Al, Mg, Zn, and others is projected to grow. The components made up of these materials use metal casting, which suggests a positive outlook for metal casting in the automotive industry, especially for passenger cars.

Alloy wheels, cross car beam, front doors, and seat frames are the key body assembly components that are manufactured using metal casting process. According to a publication by the US Department of Energy (DOE), the body and structure constitutes around 47.0% of the total weight for mid-sized passenger cars. A significant amount of weight reduction can be achieved with the help of lightweight materials such as aluminum and magnesium. Tier-1 suppliers such as Faurecia, Meridian Lightweight, and GF Automotive are some of the prominent body assembly parts manufacturers offering aluminum cast components. These manufacturers have also started offering magnesium cast parts for some premium vehicles. The large contribution of body assembly in the overall vehicle weight and increasing use of lightweight materials in body assembly components are the key growth drivers for the metal casting market for body assembly. The body assembly is thus estimated to be the fastest growing application of the metal casting market.

The Asia Oceania region is estimated to be the largest market for metal casting from 2017 to 2025. The region is the global leader in vehicle production with a production growth of around 27.7% in the past 5 years for passenger cars and commercial vehicles. China has been the leading automobile market in the region in vehicle production as well as sales. According to OICA, China, along with Japan and India, accounted for almost 44% of the global vehicle production in 2016. Furthermore, as per the World Bank statistics, the per capita income in China and India increased by approximately 68% and 14%, respectively from 2010 to 2015. The rise in disposable income is expected to increase the sales of medium and premium end vehicles, which, in turn, would increase the demand for aluminum or magnesium cast components in the region.