The scope of this report covers the analysis of the Military Communications Market based on communication type, component, application, end user, and region. Rapid adoption of advanced Ka-band satellites for communication services as well as increasing use of Mobile Ad-Hoc Networks (MANETS) are the factors offering growth opportunities to the military communications market. MANETS are being deployed on a large scale due to the increasing use of UAS for both surveillance and military war operations that generate a massive amount of data, which needs to be transferred between command centers and tactical communication networks.

Traffic Management Market Revenues to Expand at a CAGR of 13.7% by 2023 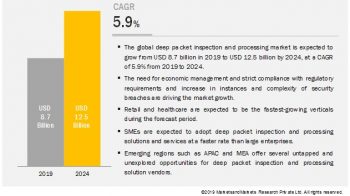 Deep Packet Inspection and Processing Market worth $12.5 billion by 2024