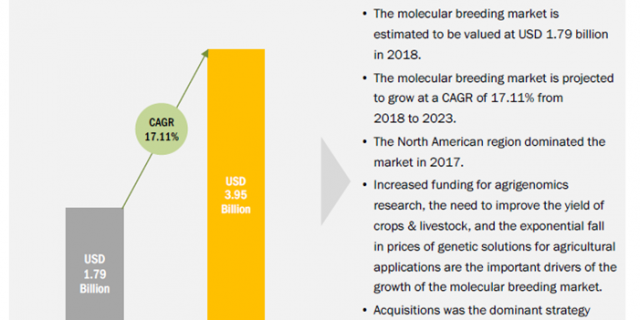 The Molecular Breeding Market is projected to reach USD 3.95 billion by 2023, from USD 1.79 billion in 2018, at a CAGR of 17.11% during the forecast period. The market is driven by factors such as the rising public and private funds toward agrigenomic research, declining prices of genomic solutions, increasing adoption of molecular techniques in livestock breeding, and technological advancements such as the emergence of genomic selection technology in the market.

Among different processes, the genomic selection segment is projected to be the fastest-growing from 2018 to 2023

Genomic selection is a recent development in the molecular breeding market, and hence, its awareness and adoption have been gradually increasing, especially across North American and European countries. Genomic selection helps in the rapid selection of superior genotypes and accelerates the breeding cycle. This technology is applicable to the population that has even minor differences from the reference population. Cost and time efficiency are the major factors attributing to the increasing adoption of this technique over the traditional phenotypic selection. The increased accuracy achieved with genomic selection has been attracting key agrigenomic service providers in the global market.

In terms of application, the cereals & grains segment is estimated to dominate the market in 2018

With the increasing global concern on food security and rising demand for crops in various industries, there has been an increasing need to bridge the supply-demand gap, owing to which the demand for crops with the desired traits has been rising among the plant breeders. Owing to the increasing demand for industrial crops such as corn, wheat, and sorghum, the adoption of advanced technologies for these crops is expected to further increase in the coming years. The application of molecular technology is at the nascent stage for livestock, wherein cattle is the predominant livestock that is selected using these techniques.

Single Nucleotide Polymorphism (SNP) segment is projected to be the fastest-growing during the forecast period.

The SNP segment is projected to register the highest growth rate from 2018 to 2023. SNP provides the simplest form of molecular markers as a single nucleotide base. They are abundant, ubiquitous, and amenable to high- and ultra-high-throughput automation. Owing to the high accuracy and higher number of loci with SNP in comparison to SSRs, companies have been using SNPs for molecular breeding services. As per inputs from industry experts, the adoption of SNPs is expected to increase until the introduction of a better molecular marker. Even in case of a new marker discovery, SNPs would still be the most widely used marker during the forecast period, taking into account the high possible prices of the new markers.

North America is estimated to dominate the market in 2018, while Asia Pacific is projected to be the fastest-growing market for molecular breeding through 2023.

The North American region is estimated to account for the largest share in 2018 due to the presence of players such as Eurofins (Luxembourg), Illumina (US), Thermo Fisher Scientific (US), and Charles River (US). Moreover, the presence of these companies in technologically advanced countries such as the US and Canada has resulted in an increase in the adoption of molecular breeding technologies. Additionally, factors such as the rising number of entrepreneurial farmers with increasing awareness of modern agricultural practices and efficient distribution channels are the key competitive advantages for the North American market.

The market for molecular breeding in the Asia Pacific region is projected to grow at the highest CAGR from 2018 to 2023, owing to the increasing investments by key players in countries such as China, India, and Thailand along with the rising adoption of molecular technology among crop breeders.

Agricultural Sprayers Market worth $3.5 billion by 2027