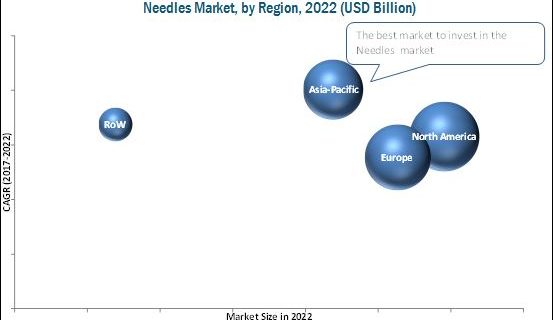 These needles are used for injecting the drug into the subcutaneous layer; this enables the quick absorption of active compounds into the bloodstream, which is a key factor contributing to the market growth of this segment.

Key factors such growing geriatric population, increasing number of hospitals in emerging markets, and high prevalence of chronic diseases is the major factors driving the growth of the Needles Market across the globe.

As of 2016, North America held the largest share of the global needles market, followed by Europe. Its dominant share is attributed to the rising incidence of chronic diseases, initiatives by different organizations for the reduction in blood borne infections, and increasing prevalence of cardiovascular diseases.