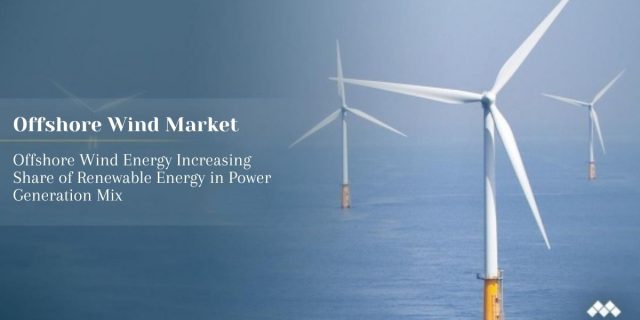 The global Offshore Wind Market is expected to grow from an estimated USD 31.8 billion in 2021 to USD 56.8 billion by 2026, at a CAGR of 12.3% during the forecast period. Offshore wind is a crucial pillar in energy mix together with onshore wind for regions such as Europe, Asia Pacific, and North America to achieve their goals pertaining to climate neutrality. Offshore wind turbines are increasingly being installed in Asia pacific and European region and are showing robust growth. Increasing global investments in renewable energy are likely to drive the offshore wind market.

The emergence of offshore wind farms started with the necessity to reduce greenhouse gas emissions and increase the share of renewable energy in the total energy mix. With the globally increasing consumption of electricity, new technologies are expected to influence the production, transmission, distribution, and use of electricity. Conventional sources of electricity lead to climatic changes, environmental pollution, and other issues. Thus, the offshore wind market is gaining momentum, and there exists a lot of untapped potential in this market.

The turbines segment is expected to grow at the highest CAGR from 2021 to 2026.

Europe accounted for the largest share of 57% of the offshore wind market amongst all regions in 2020. The European market is further segmented into UK, Germany, Denmark, Belgium, Netherlands, Sweden, Finland, Ireland, and Rest of Europe. The European region is home to several major offshore wind companies such as Siemens (Germany), Nordex SE (Germany), Vestas (Denmark), ABB (Switzerland) and many more. European region has been a pioneer in offshore wind technology and offshore wind farm development. The countries in the EU are primarily focusing on upgrading their aging electrical infrastructure, and governments of these countries are promoting power generation through renewable energy sources and are building networks, from generation to end-users, to allow for efficient power and energy trading.