Skip to content Skip to blog sidebar
Home » Telecom and IT » Perimeter Security Market worth $96.5 billion by 2026 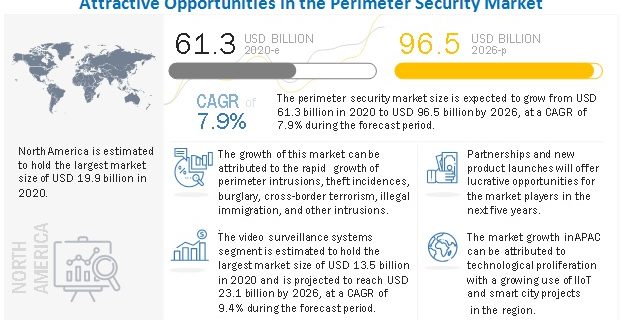 According to a new market research report “Perimeter Security Market by Component (Systems (Perimeter Intrusion Detection, Video Surveillance, Access Control, and Alarms and Notification Systems) and Services (Professional and Managed Services)), Vertical, and Region – Global Forecast to 2026″ published by MarketsandMarkets™, the Perimeter Security Market projected to grow from USD 61.3 billion in 2020 to USD 96.5 billion by 2026, at a Compound Annual Growth Rate (CAGR) of 7.9% during the forecast period. The rise in perimeter intrusions, theft incidences, burglary, cross-border terrorism, illegal immigration, and other intrusions to drive the market growth.

By component, the system segment to register the highest growth rate during the forecast period

The systems segment of the Perimeter Security Market is broadly categorized into perimeter intrusion and detection systems, video surveillance system, access control, alarm and notification systems, and other systems. It involves the use of a wide variety of systems to enhance security measures. These systems investigate and prevent crime in public places, such as airports, shopping malls, and banks. The increasing concern for safety and the rising incidents of terrorism are expected to drive the demand for perimeter security systems, globally.

Based on vertical, the commercial segment to grow at the highest CAGR during the forecast Period

In the commercial segment, various commercial areas, such as IT and telecom, warehouse, retail, BFSI, media and entertainment, lodging, hospitality, and healthcare, are considered. The commercial vertical is expected to be the largest vertical in the Perimeter Security Market. The rising demand for perimeter security systems in the retail and banking sectors is driving the growth of this market. Furthermore, the implementation of intelligent perimeter security solutions enhances the security in office buildings and healthcare industries.Browse Full Report @

The Perimeter Security Market in North America includes countries such as the US and Canada. The region’s high defense budget and expenditure and increasing need for security against attacks are among the main factors responsible for its large market size. In the US, the government has taken initiatives to implement advanced surveillance systems at government buildings and high-security areas. North America is considered the pioneer in adopting perimeter security systems for public safety. Also, there is constant progress in adopting new technologies, mainly the transition to IP-based video surveillance. The need for perimeter security systems has been observed in all the major industries, such as transportation, government and defense, critical infrastructures, nuclear plants, chemical industries, power, and oil & gas, across the region. Due to increasing perimeter intrusion threats, the requirement for multilayer perimeter protection has increased, thus offering huge growth opportunities for the Perimeter Security Market.

MarketsandMarkets’s flagship competitive intelligence and market research platform, “Knowledge Store” connects over 200,000 markets and entire value chains for deeper understanding of the unmet insights along with market sizing and forecasts of niche markets. 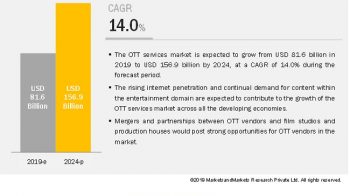 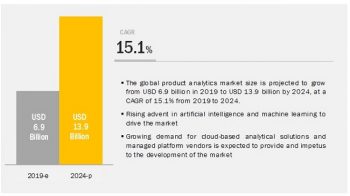 Product Analytics Market will reach to $13.9 billion by 2024