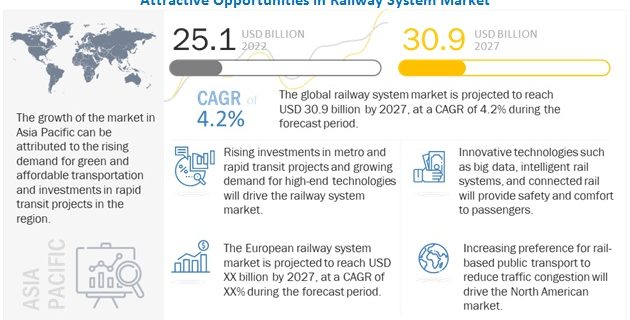 The global railway system market is estimated to be USD 25.1 billion in 2022 and projected to reach USD 30.9 billion by 2027, at a CAGR of 4.2%. The growing requirement for upgradation and refurbishment of existing rolling stock is expected to drive the railway system market.

Rising concerns regarding a greener environment have increased the demand for non-polluting and energy-efficient transport systems globally. Additionally, the oil-importing countries are also planning to reduce their oil dependency, thereby looking for an alternative energy source. As a result, most countries prefer electricity as a source of energy for various rolling stocks. This has resulted in increasing electrification of railway networks all over the world. Therefore, the demand for electric locomotives and EMUs is rising at a rapid pace globally, this is expected to drive the railway system market

The railway system market for rapid transit is projected to grow at a higher CAGR during the forecast period. Increasing urbanization is the major reason for the growth of intercity and intracity transportation. The rapid transit includes subways/metros, light rails/trams, DMUs, and EMUs, which are mostly used for intercity and intracity travels. Rapid transit is equipped with electric propulsion and advanced systems for comfort and safety. Increasing adoption of rolling stock and rising investments by governments in infrastructure developments are expected for the rapid transit segment.

The Asia Pacific railway system market is expected to be the largest market during forecast period, followed by Europe, North America, and RoW. The Asia Pacific region is the largest market for rolling stocks due to increased production, domestic demand, and capacity expansions by rolling stock manufacturers. This increase in production helps cope with the rising demand for rail transportation and concerns related to fuel-efficiency norms and regulations. In addition to domestic markets, there is an increase in demand from international markets. For example, in February 2021, CRRC Corporation Limited won a supply contract to supply 10 diesel locomotives to KiwiRail of New Zealand, and the company won a supply contract to supply 100 trams to Bucharest Town Hall of Romania in the same year. Moreover, many companies such as ABB and Alstom are expanding their presence and product offerings in high-growth potential markets to gain traction in the railway system market.