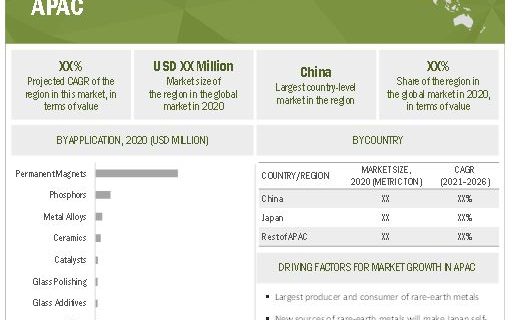 The terbium oxide segment, by type, is projected to grow at the highest CAGR during the forecast period. Terbium is often used in compact fluorescent lighting, color displays, and as an additive, to permanent rare-earth magnets so they can function better under higher temperatures. It can also be found in fuel cells designed to operate at elevated temperatures and some electronic devices as well as naval sonar systems. Terbium is mostly used in green phosphors in all types of screens, including television, computers, and digital display boards. It is also used in alloys and the production of various electronic devices.

Do Inquiry Before Buying At https://www.marketsandmarkets.com/Enquiry_Before_BuyingNew.asp?id=121495310

In terms of geographic coverage, the rare-earth metals market has been segmented into five regions, namely, North America, the Asia Pacific, Europe, and the ROW. The Asia Pacific region accounted for the largest share in 2019 and is also projected to record the highest growth rate during the forecast period. APAC is the largest producer and consumer of rare-earth metals across the globe.  APAC is the top region in terms of total rare-earth material consumption due to rapidly increasing demand in China, which accounts for maximum global rare-earth consumption. It was the largest consumer of rare-earth elements in 2019, with an estimated market revenue of over USD 5.2 billion. The region is also expected to witness the fastest-growth in terms of consumption due to growing industrialization and extraction activities in China.