The report on the SATCOM equipment market for space provides an analysis of the market from 2017 to 2025. It discusses industry and technology trends currently prevailing in the market, along with drivers, restraints, challenges, and opportunities influencing the growth of the market. The SATCOM equipment market for space is projected to grow from USD 2.8 billion in 2019 to USD 7.0 billion by 2025, at a CAGR of 16.8% from 2019 to 2025. The market is expected to witness substantial growth in the North American and Asian Pacific regions during the forecast period due to increasing satellite launches in these regions. Countries such as China and India are heavily invested in the development of their space programs and are periodically launching satellites for communications, navigation, and earth observation.

By end user, the commercial segment of the market is projected to grow at the highest CAGR during the forecast period. The growth of this segment can be attributed to large investments being made by various private players to launch constellations of satellites for communication and Earth observation. For instance, according to the 20th edition of Euroconsult’s “Satellites to be Built & Launched” report, 3,000 satellites will be launched between 2017 and 2026. 1,800 small satellites were launched in 2017 by 23 commercial constellations, of which 1,000 small satellites were launched by OneWeb, into Low Earth Orbit.

By component, the transponders segment of the market is projected to grow at the highest CAGR during the forecast period. Demand for transponders for satellites is driven by the increasing launch of satellites to cater to the growing demand for broadband access, DTH (direct-to-home), and DTT (digital terrestrial television), among others. Increased need for global connectivity, the introduction of 5G, and the launch of satellites for such applications are driving the market for transponders. The introduction of 5G has made manufacturers launch 10–GigE (Gigabit Ethernet) transponders, which have high port density and relatively lower port cost. Innovative companies such as Fujitsu (Japan) have developed transponders for optical communications. Such innovations are driving the market for transponders.

Know more about the Global Market:

By region, the North America SATCOM equipment market for space is projected to grow at the highest CAGR during the forecast period. North America is technologically advanced and has a variety of space missions dedicated to scientific research and experimentation. Private players in the US, such as OneWeb, SpaceX, and Amazon, are invested in the development and launch of satellites for communication. Such launches are expected to have a significant impact on the SATCOM equipment market for space in North America. 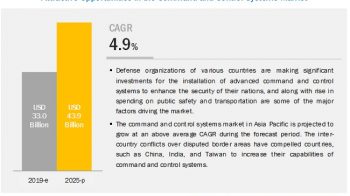 Command and Control Systems Market worth $43.9 billion by 2025