The global seaweed cultivation market size is estimated to be valued at USD 16.7 billion in 2020. It is projected to reach USD 30.2 billion by 2025, recording a CAGR of 12.6% during the forecast period. The demand for seaweeds as a raw material from various end-user industries, such as food, agriculture, animal feed, cosmetics, pharmaceuticals, energy, etc. and growth in consumer awareness regarding seaweeds health benefits are expected to drive the growth of the seaweed cultivation market.

To uplift the socio-economic status of small-scale fishermen, raise the living standard of the coastal community, and to promote the sustainable usage of coastal and marine resources, seaweed farming has become an alternative livelihood option in tropical developing countries. Furthermore, seaweeds grow at a higher rate and do not require fresh water or land space. They also do not require industrial fertilizers and pesticides that pose a threat to the environment. As a result, economical harvesting practices, together with the ease in handling cultivated seaweeds, have further encouraged seaweed farming across key seaweed-producing countries.

The biggest challenge for seaweed manufacturers is the occurrence of natural calamities, which affects the production of seaweeds in the coastal areas of seaweed-producing countries in the Asia Pacific and South American regions. Natural calamities, such as typhoons, floods, droughts, earthquakes, volcanic eruptions, and pests & diseases, affect the productivity of seaweed farming. The occurrence of such calamities is uncontrollable and poses a significant challenge to seaweed farmers. In response to such instances, seaweed farmers have shifted to building artificial ponds in off-marine areas (mariculture), requiring seawater. However, the adoption of such alternatives in cultivation techniques is associated with high costs that pose a financial challenge to the farmers, thereby affecting the scale of seaweed production.

The cultivation of seaweed is majorly undertaken in the Asia Pacific region. After cultivation, this seaweed is then dried and exported to developed regions such as Europe and North America for further processing and to derive extracts to be used in end-user industries. Also, due to the lack in technology in the Asia Pacific region, labor engagement is higher, which adds to operational costs. Thus, to reduce labor engagement, implementation of new technologies, such as direct seeding technologies, automated harvesters, can be introduced in various Asian countries.

The industry is also moving forward toward the adoption of new trending technologies such as machine learning, IoT, and artificial intelligence, to help improve seaweed production and monitor seaweed biomass and habitat thus, driving the growth of the market.

Challenges: Toxicity associated with the consumption of seaweeds

The consumption of seaweed extracts and seaweed packaged products harvested from aquaculture has certain harmful effects due to toxic minerals, which lead to health concerns globally. Seaweed products that are sold commercially are majorly in the form of partially dried seaweeds that are packaged in plastic containers and sold in the form of tablets and powder. Seaweeds harvested from wild stock have safety concerns associated due to the presence of heavy metal residues such as arsenic and iodine. Higher intake of these heavy metals present in seaweeds can lead to medical complications, such as cancer, brain damage, gastrointestinal problems, and kidney diseases.

The consumption of excess seaweed increases the quantity of iodine above the required levels. This raises the levels of thyroid-stimulating hormone, thereby causing serious conditions such as goiter. These health concerns caused by the intake of seaweed products have restricted the consumption of seaweeds, thereby affecting the growth of this industry.

By application, dairy sub-segment in the food segment is projected to account for the largest share in the seaweed cultivation market during the forecast period

The seaweeds used in the dairy products under the food segment dominates the application segment throughout the forecasted period. Seaweed extracts such as agar, carrageenan, and alginate have wide applications in the dairy industry. These extracts are used as a thickening and gelling agent in products such as cheese, creams, desserts, ice creams, dairy powder, and dairy drinks. Alginates are also used as stabilizers to improve the viscosity of milk drinks, such as chocolate milk drinks. 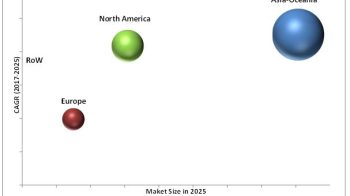 Driveline Market Size and Forecast to 2025